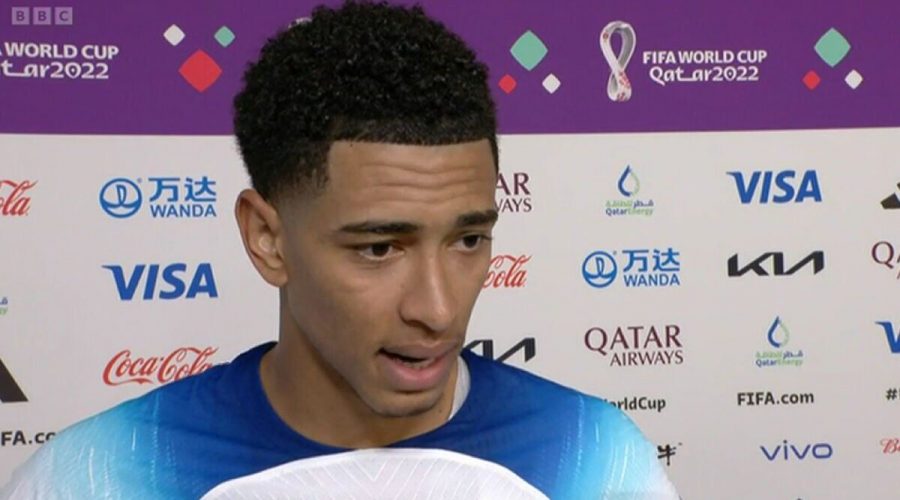 England ace Jude Bellingham has explained that manager Gareth Southgate told him to “enjoy the wins” after the Three Lions thumped Iran in their opening World Cup clash. Bellingham was in inspired form and opened the scoring as England ran out 6-2 winners.

England were frustrated for large parts of the opening period but finally broke the deadlock after 35 minutes as Bellingham rose highest to head home a cross from Luke Shaw. Bukayo Saka and Raheem Sterling then extended the Three Lions’ lead before the break.

England were in cruise control after the interval and went 4-0 ahead as Saka bagged his second goal of the afternoon. But Mehdi Taremi pulled a goal back for Iran midway through the second period. Southgate’s side were never really in danger of losing their lead, however, as substitutes Marcus Rashford and Jack Grealish got their names on the scoresheet, before Taremi added his second goal of the game for Iran.

Bellingham, who has already won 18 caps for his country at the tender age of 19, played the full 90 minutes in Qatar and looked assured in midfield as he broke up play and helped his side move forward. And after the match, the teenage sensation revealed he and his team-mates had been told to make the most of the result.

“He (Southgate) said enjoy the wins because it would’ve been a different reaction had we not got that result,” Bellingham told the BBC. “But we need to look at the next game and realise there’s another challenge coming.”

Bellingham had never scored for his country ahead of the match but recently joked that he was saving his first goal for the World Cup. And after the showdown with Iran, he added: “I told you I was saving it. It was a really good day for us. Six goals in a World Cup game is really impressive no matter who you’re playing against.

“The start was tough and we had to dig it out – Iran were strong. It’s important that we learn how to create chances against those kinds of sides. I thought I’d missed [when I scored] as it took ages to loop into the goal. I told you I wanted to get more goals for [Borussia] Dortmund and England.”

England’s win means they are now top of the Group B table. And Southgate’s side will be looking to produce another scintillating performance when they take on USA on Friday night.