They have shared the empathetic chats about growing pains. Now the only nagging issue Steven Gerrard wishes Jordan Rossiter to be occupied by is how to break into a Rangers central midfield where the Ibrox competition is hottest.

Plagued by fitness setbacks throughout his near two-and-a-half year Rangers career, Rossiter has emerged from that torrid period to contend for a place in his former Liverpool hero and captain’s Ibrox team.

Perhaps taking a lesson from his own occasional fitness troubles as a young Anfield midfielder unable to help his body manage two or three games a week, Gerrard has deliberately restricted Rossiter to domestic travels while the 21-year-old is nursed towards peak condition. 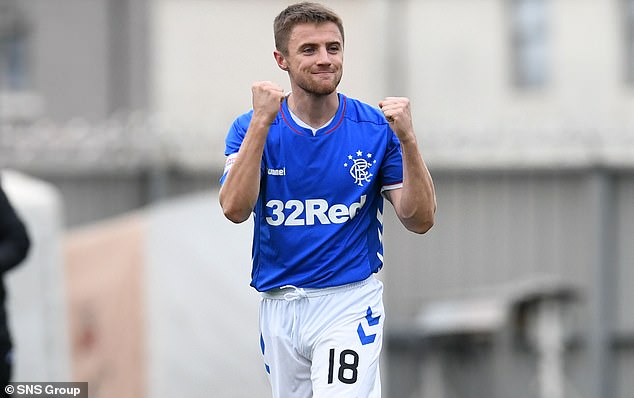 So, while his team-mates fight off any fatigue linked to the long journey to Russia and back, Rossiter is primed to play a big role on Sunday when Motherwell visit Ibrox.

If making the line-up, this will be Rossiter’s second start under Gerrard and only ninth appearance for the club since breaking down in August 2016 when tipped to be an inspired Mark Warburton signing.

In his autobiography, Gerrard described injury issues in his early 20s, which required countless visits to overseas specialists, as his ‘personal stalker’. He succeeded in putting those concerns behind him. 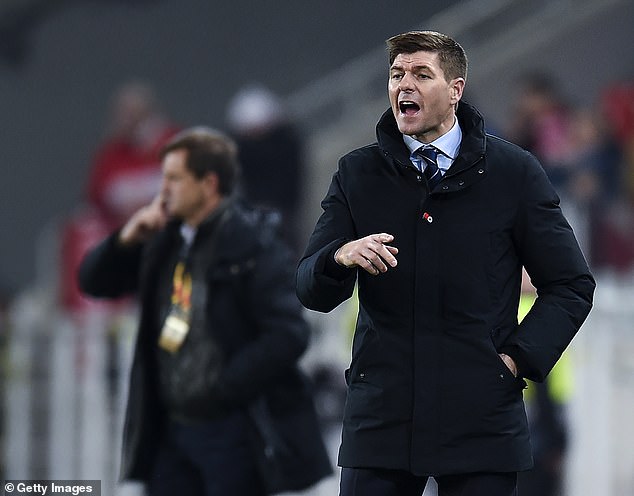 Rossiter has endured worse and could probably write a book about his troubles since moving to Glasgow in an inventive, cross- border, bargain raid by Rangers for the then England Under-19 skipper. But both he and Gerrard believe enough words have been written and spoken about on the subject.

‘I’m here to support him, he’s my player, he’s a good player who’s had a really tough time,’ said Gerrard. ‘But I think it’s important that we don’t keep talking about that tough time. We are hoping that’s behind Jordan now.

‘He’s repeating training sessions, he’s been available. I made it very clear to him in terms of the European run that – and maybe I’m wrong – it was important we protected him from that.

‘With where his body is right now, he doesn’t want to be travelling Thursday night, be involved, and then get ready for Sunday.

‘Week to week, getting full training in, getting his body conditioned, that’s his first challenge. Then I’ve no doubts he will show everybody what he’s capable of.

‘I think he can do a bit of everything very well. He’s very fit, in terms of endurance, so he hits big numbers and covers a lot of grass. He’s nearly as good at tackling as me!

‘He can pass the ball short and long, he’s honest, I trust him. He’s up for it; he’s my style of player who’ll empty it for you.

‘So, he’s just got to be patient and let it happen and it will come. There’s a lot of football to be played from now until the end of the season. He’ll get a lot more appearances if he’s looked after himself.

‘That will be a good platform for him to move forward, in my opinion. He’ll disagree because he wants to play every game. That’s the way he is, if I know the kid.’ Rossiter’s woes, predominantly hamstring and calf issues related to his lower back, would have destroyed many a veteran. To go with the physical strain, there was the psychological torture of not knowing from the ages of 19 to 21 when his career might be allowed to resume.

‘I’ve lost two years of my career, basically, and I need to get that back,’ said Rossiter. ‘Playing a lot of football when you are young is important for your career, for your development. And I’ve missed that out.

‘I’m feeling good at the minute, so hopefully that continues. Physically and mentally, I’m in the best place I’ve been for a good few years.

‘And as the gaffer said, I just need to keep staying fit and be available for selection. If my chance does come, it’s up to me to take it.

‘I need to be reminded to go carefully. The gaffer or the sport scientists need to rein me in from time to time but I just need to trust them, trust the process, and hopefully it will get better.

‘I think I’ve always been someone who does look after himself but obviously there was a reason why I was always getting injured and thankfully we got to the root of the problem. It’s a great lift mentally. I’m just looking forward to the future now.

‘I’ve never been a regular week-to-week player in my career. That’s what I need to aim for although I understand there’s a lot of competition. There are a lot of games to be played and I feel I can be a part of this club.

‘It’s an unbelievable place to come in every day and work. I’m just lucky to be a part of it. Since I’ve been here, the fans have been brilliant. I can’t speak highly enough of them.

‘They’ve given me so much support, although I don’t know if I deserve that support after two years of injury, if I’m being honest. I just want to repay them as well as the club.’ Rossiter is keen to stress that the recruitment of Gerrard as manager is no added incentive to succeed at Rangers. He does not require extra motivation.

However, the arrival of an icon he was tipped to replace at Liverpool and a support staff of Scousers creates only positive emotions for a young man handed a senior Anfield debut at 17 by Brendan Rodgers four years ago.

‘I remember the first time I came up to train at Melwood, Steven Gerrard was brilliant with me, as he has been here for Rangers,’ recalled Rossiter. ‘I learned so much off him as a player training with him every day and I hope I’ll learn so much more under him as a manager.

‘Of course, you’re trying to impress him. And now it’s the same, though that would be the case for whoever was in charge of this football club.

‘I want to play every minute of every game and hopefully that will come at some point. It makes it a bit more special working under him.’

November 11, 2018 Soccer Comments Off on Jordan Rossiter is ready to turn the page on his injury torment
NFL News