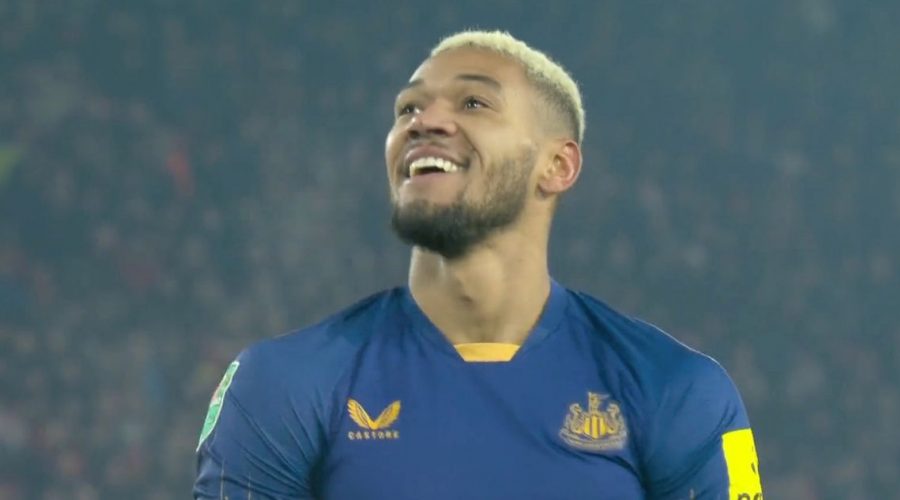 Fans are in disbelief at Joelinton’s ‘miss of the season’ which left even the Newcastle star himself laughing.

Newcastle had a tremendous opportunity to go in front of Southampton just after half time of Tuesday’s Carabao Cup semi-final first-leg. Some typically outstanding wing play from Miguel Almiron suddenly saw the ball deflected into Joelinton’s path on the edge of the six yard box.

But with the goal gaping, the 26-year-old somehow skied his effort over the bar with a side-footed attempt. The Brazilian midfielder appeared stunned, almost dropping to his knees before laughing to himself in disbelief.

And fans quickly took to Twitter to troll him over the shocking effort, with one user writing: "Some miss from Joelinton for Newcastle. He was even laughing after it because it was so bad."

Others chimed in by tweeting: "Miss of the season there from Joelinton!!" and “That missed sitter is a timely reminder that Joelinton was bought as a 40million pound striker."

Do you think Joelinton's effort is the miss of the season? Let us know in the comments section.

It added further insult to injury after Joelinton’s first-half goal was ruled out for a questionable hand-ball decision. In stunning scenes, VAR failed to get involved with referee Stuart Attwell’s decision due to there not being sufficient angles to determine what had actually happened.

Some of the angles appeared to show the ball striking his arm, while others instead showed the ball touching his chest. Attwell was not instructed to consult the dreaded monitor.

Yet Joelinton would have the last laugh as he netted the winner in the 73rd minute, having once again made a lung-busting run into the six-yard box to meet Alexander Isak’s ball.

He made no mistake with his finish on that occasion, successfully placing it beyond Gavin Bazunu and finally being rewarded for his persistence.

January 24, 2023 Soccer Comments Off on Joelinton’s ‘miss of the season’ for Newcastle was so bad ‘even he was laughing’
NFL News