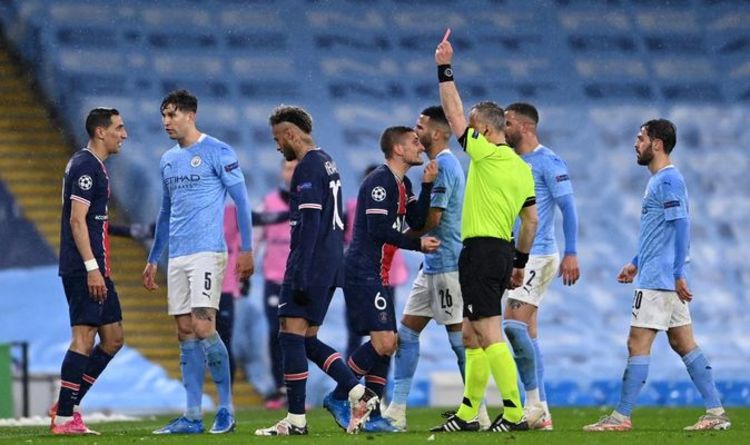 Jim Beglin has issued an apology for using “a racial stereotype” in commentary during Manchester City’s Champions League semi-final win over Paris Saint-Germain. The former Liverpool defender was on co-commentary duty for American broadcaster CBS for Tuesday night’s second leg at the Etihad Stadium.

Two goals from Riyad Mahrez sent City into their first Champions League final as a 2-0 win on the night gave Pep Guardiola’s side a 4-1 victory on aggregate.

It was a dominant performance for City who kept Neymar quiet throughout and ensured goalkeeper Ederson did not face a single shot on target.

While the night was one of celebration for City, the second half was also notable for the number of incidents, with referee Bjorn Kuipers handing out six yellows and one red card in a fractious match.

That red was issued to PSG attacking midfielder Angel Di Maria, who lashed out at Fernandinho while trying to retrieve the ball for a throw-in.

The former Manchester United man kicked the Brazilian in the shin on the touchline and was sent off in the 69th minute as the discipline of Mauricio Pochettino’s side slipped. 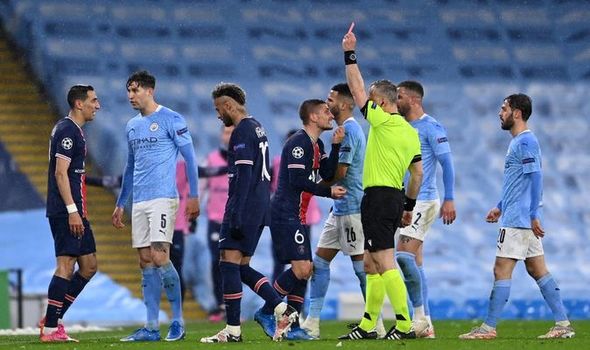 Social media immediately lit up with people questioning his comments and the 57-year-old quickly apologised on air.

“When Di Maria was sent off, I described it by using the word Latino,” he said. “For anybody that’s taken offense, I do apologise, sincerely apologise.”

After the match had finished, Beglin took to Twitter to make a full apology.

“I apologise for my culturally insensitive remarks during the Champions League tie between Manchester City and Paris Saint-Germain,” he wrote.

“I wrongly used a racial stereotype. This was inappropriate and unacceptable. Words have a strong impact, and I fully understand the severity of what I said when Angel Di Maria was sent off.

“I will learn from this and be better moving forward.”

CBS has not yet commented on Beglin’s remarks.

In his post-match interview with BT Sport, Mahrez commented on PSG’s loss of discipline in the second half.

“We didn’t start well again. We didn’t have a good first half but we got the goal and we were more comfortable.

“We played well in the second half and we could have scored more. They lost their nerve and started to kick us and after the red card it was more comfortable.”

As well as Di Maria’s red card, Ander Herrera, Marco Verratti, Presnel Kimpembe and substitute Danilo were all booked for the away side.

May 5, 2021 Soccer Comments Off on Jim Beglin apologises for ‘racial stereotype’ during Di Maria incident in Man City vs PSG
NFL News