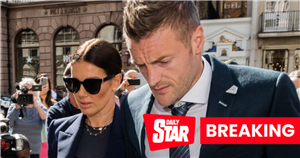 It has been reported that the fire originated from the striker's outdoor gym before being put out by the emergency services a short while later, with wife Rebekah taking to social media to offer an update.

Paying tribute to the firefighters, she posted: "Every cloud and all that. Thankfully no one was hurt…. Buildings and contents are replaceable and the kiddies enjoyed the fire engines. Thank you for being so brilliant @lincolnshirefirerescue."

Having been called out at 3.20pm on January 19, a Lincolnshire Fire and Rescue spokesman said: "The fire resulted in severe damage to 90 per cent of the wooden outbuilding, which was used as a gym and the equipment inside.

"Crews used four breathing apparatus, one hose reel and one thermal imaging camera to extinguish the fire. It was caused by an electrical fault."

Jamie and Rebekah share three children, with the Leicester man having one child from a previous relationship and Rebekah having two, with the youngsters even enjoying seeing the fire engines according to their mum.

The luxurious mansion has a tennis court, sauna and indoor pool as well as the gym, with eight bedrooms before permission was granted for a four bedroom extension in 2020.

Vardy remains at Leicester seven years after they won a shock Premier League title, scoring a total of 168 goals for the club having also won the FA Cup in 2021.

Rebekah was in the news this year regarding a high-profile libel trial against Coleen Rooney.

Judge Justice Steyn ruled in favour of Rooney on 29 July, with Rebekah disagreeing with the verdict.