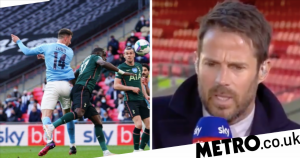 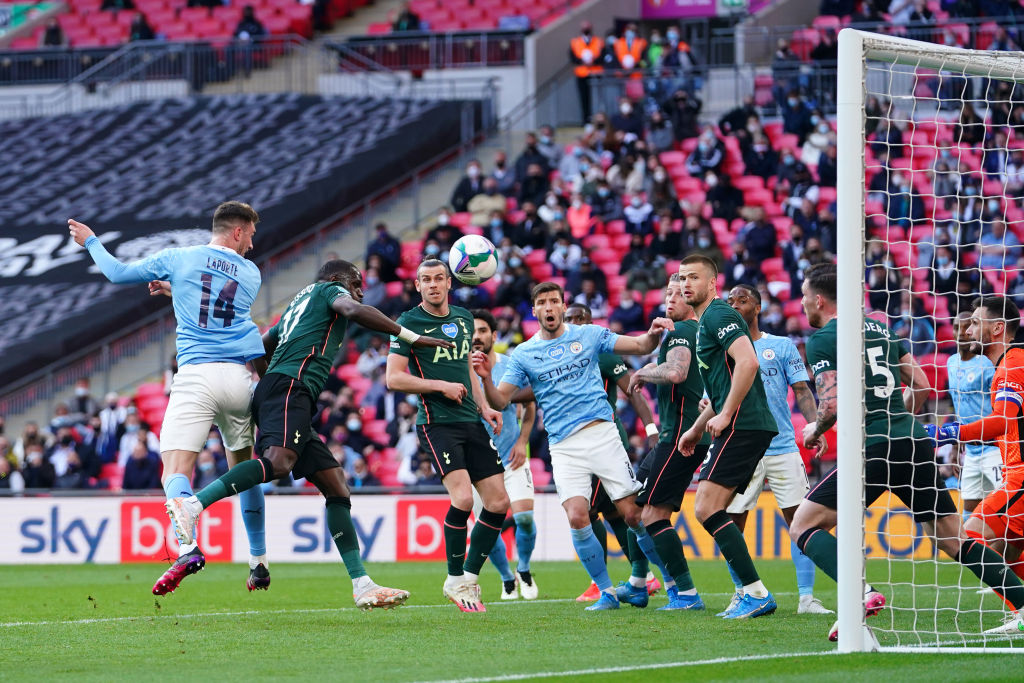 Jamie Redknapp criticised Serge Aurier and Moussa Sissoko for the part the played in Tottenham’s Carabao Cup final defeat to Manchester City and felt the duo gifted Pep Guardiola’s side their winning goal with a pair of avoidable mistakes.

Sunday’s spectacle, which took place in front of 8,000 fans at Wembley, had looked on course for extra-time as Ryan Mason’s stubborn Spurs team managed to withstand large periods of City dominance heading into the final ten minutes.

But Aymeric Laporte proved to be an unlikely matchwinner as he rose highest to direct home Kevin De Bruyne’s free-kick in the 82nd minute and Guardiola’s men held firm to clinch the trophy for a fourth straight season.

The decisive late opportunity arrived after Aurier brought down Raheem Sterling with a clumsy challenge near the corner flag and ex-Spurs midfielder Redknapp was less than impressed with the Ivorian’s ‘ridiculous’ defending.

The Sky Sports pundit said: ‘For all the great football that Manchester City played – the amount of times they played it through the lines and got themselves into fantastic positions – they ended up getting the goal from two defensive mistakes from Spurs’ point of view.

‘Aurier does well to start with, he follows him and then he just makes the most ridiculous and rash decision that we see him do so often.

‘Just stand up, don’t dive in, don’t give the foul away. Elementary mistake.’

Redknapp said Sissoko got his body position all ‘wrong’ while defending Laporte for the decisive set-piece.

‘Then you get a player who has come on as a substitute, Sissoko,’ he went on.

‘He’s telling someone else what to do instead of doing his own job.

‘He doesn’t see the run, his body position is wrong.’

Former Tottenham and England centre-back Michael Dawson added: ‘You’ve got to open your body, surely you should see that!

‘He seems to do that to start with and then he gets square on as the ball is just about to be delivered.

‘As soon as Laporte gets the run on him you’re in all kinds of trouble.

The final represented Tottenham’s last realistic shot at silverware this season and Son Heung-min was inconsolable as he broke down in tears at the full-time whistle.

City midfielder Fernandinho, club captain since David Silva’s departure, became the first player in history to win the competition for a sixth time with the dominant victory.