Jadon Sancho is now in a position to join Manchester United after his appearance for England against Iceland triggered a bonus payment in his Borussia Dortmund contract, according to transfer expert Ian McGarry. Sancho won his 12th cap for England in the late 1-0 Nations League win over Iceland on Saturday but it was his only his 11th competitive match for the Three Lions. And McGarry claims that 11th competitive appearance means the winger and his representatives are now due a payment from Dortmund.

United’s pursuit of Sancho has been the transfer saga of the summer so far.

It appeared the Red Devils, as of yet, were not prepared to pay the £108million asking price for the 20-year-old.

However, McGarry claims United have been playing the waiting game, allowing Sancho to play for England and receive the payment from Dortmund that he would not have got if he joined United.

United are said to be “comfortable” with the situation and have a deal in place to complete for the talented forward. 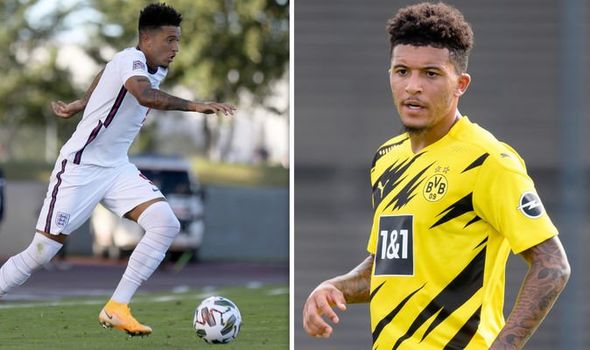 “Jadon Sancho, we have discovered, has a bonus with his two-fold in his current Borussia Dortmund contract,” McGarry said on the Transfer Window podcast.

“The bonuses are based on the contract upgrade he signed last summer with Dortmund and the one-year completion of that contract which is going to bring him around €1.5m net in payment but also, and this is interesting because of what’s happened in the last five days, a bonus if he makes 10-plus England caps, which of course he started against Iceland for Gareth Southgate’s team and made his 11th cap.

“That’s the trigger point which Sancho and his representatives and a family member have been waiting for in order to collect that bonus.

“We have told you consistently that United are very comfortable with their position on Sancho, they believe they have a deal in place with the player and with Dortmund, and it is our information that they have been simply waiting it out until these payments were due to be made to the player but more importantly to his representatives and to his family member, who also represents him.

“This is something we are seeing increasingly in football in the modern age, where players would rather not lose out on bonus payments that are written into their contracts and therefore clubs that they may be joining therefore don’t have to pay compensation on those clauses either.”