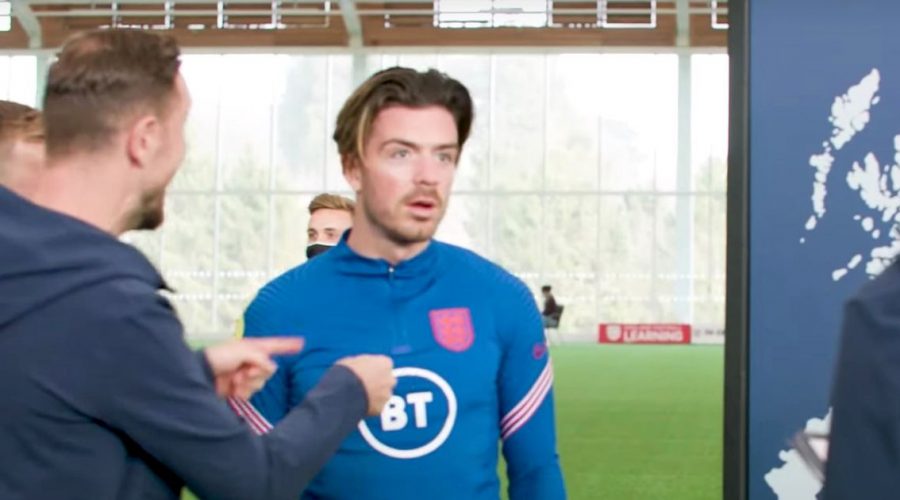 Jack Grealish left Jordan Henderson and James Ward-Prowse in hysterics by insisting there was "no chance" he'd be able to locate Birmingham on a map of Great Britain and Northern Ireland while on England duty.

The Manchester City forward was walking through the indoor training centre in a newly released video from their recent international camp, when he was called over by Henderson of Liverpool and Ward-Prowse of Southampton as well as Conor Coady of Wolves.

The trio were taking part in a challenge put on by Nationwide Building Society in which the players had to pinpoint where their colleagues were born on a map of the country – with Grealish taking a long-time to realise what the aim was.

Walking towards the group, that included presenter Emma Jones, Grealish asked how everyone was doing. Henderson, while holding up the sticker that he was tasked with placing on the map, said: "I had to guess where you are from."

With Grealish looking baffled, the Liverpool skipper added: "I want you to put where you're from."

The former Aston Villa captain then looked to the map in bemusement, which sparked laughter from Henderson and Ward-Prowse as Coady and Jones tried to assist.

Should footballers be able to locate their birthplace on a map? Tell us in the comments section Grealish asked: "Is that England?… I've got no chance."

Having left the group before returning, he took the sticker and said he was from Solihull, Birmingham, before having a go at finding it.

After being given several prompts, Grealish managed to put the sticker within a respectable distance of his home city, and claimed he was more than happy despite not getting the point.

One England fan wrote in response: "I’ve grown to quite like Grealish over this last year or so, think he’s just a bit simple but he doesn’t care, and I quite like that."

A second added: "And Pep expects him to understand his intricate tactics?"

With a third laughing: "I have no words and too many."

May 13, 2022 Soccer Comments Off on Jack Grealish leaves teammates in stitches after failing to recognise UK map
NFL News