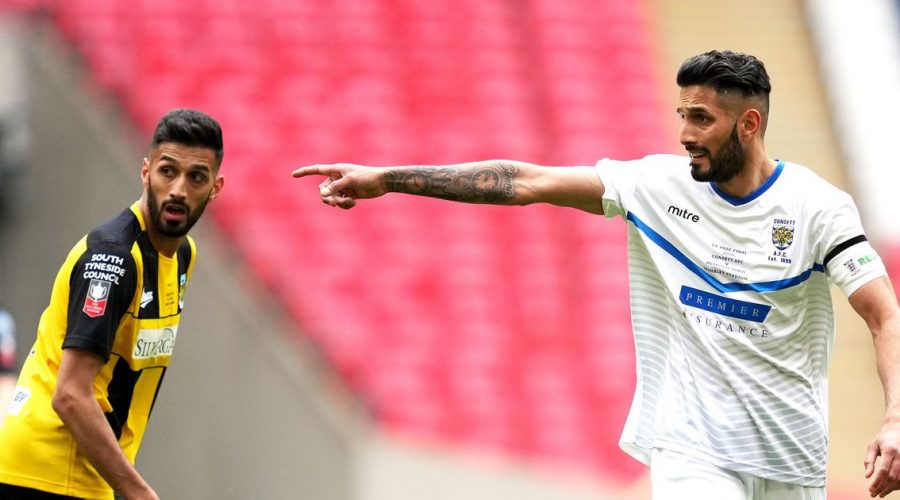 Identical twins made football history as they played against each other in a Wembley final.

Amar and Arjun Purewal, 31, had to forget brotherly love as Hebburn Town took on Consett AFC in the FA Vase.

The brothers, whose parents immigrated from India to England in the 1970s, were also the first brothers of South Asian heritage to face each other in an FA final.

It was striker Amar who triumphed as he equalised for Hebburn before they clinched a dramatic 3-2 victory thanks to super sub Oliver
Martin's late winner.

Defender Arjun, captain of Consett, collected his runner-up medal as Amar celebrated with his team-mates.

It was the first Wembley final in Hebburn Town's 109-year history.

Amar admitted playing against his brother – also his best friend and work colleague – was always going to be "bittersweet", regardless of who won.

Covid rules meant no fans at Wembley but the match was shown live on a big screen at the Hebburn ground on South Tyneside.

The twins' mother, Kelly Purewal, who runs a convenience store in Sunderland,
Tyne and Wear, told how she was cheering 'for both sides'.

"It's a shame there's only one winner. I think they should share that trophy," she said.

May 3, 2021 Soccer Comments Off on Identical twins make football history as they face off in Wembley final
NFL News