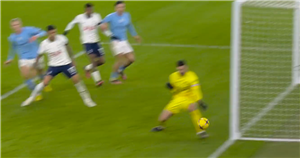 Fans are comparing Hugo Lloris to Cal the Dragon after the Tottenham keeper made a couple of glaring howlers during his side's 4-2 defeat to Manchester City on Thursday night.

Pep Guardiola's men stormed back after going 2-0 down to re-exert pressure on league-leaders Arsenal, with goals from Julian Alvarez, Erling Haaland and Riyad Mahrez putting Tottenham to the sword.

Lloris was arguably at fault for two of the goals, after unnecessarily flapping at the ball during a six-yard box scramble to leave an empty net for Alvarez to fire into for City's opener, and failing to block Mahrez's near-post strike which ultimately won the game.

The Frenchman took a pounding online during and after the match, with fans claiming TikTok star Cal the Dragon – who had a comically bad stint between the sticks during the Sidemen FC vs YouTube All Stars charity match back in September – was better than him.

"Lloris is an embarrassment to football. Cal the Dragon saves that [Mahrez shot]," one supporter tweeted.

"Hugo Lloris is finished. Can't even lace Cal the Dragon's boots," said another, while a third wrote: "How is Lloris getting caught at his near post again? Cal the Dragon levels of bad."

Should Tottenham sign Cal the Dragon? Let us know what you think in the comments section below.

It was initially City keeper Ederson under the microscope after his passing blunder allowed Dejan Kulusevski to give Tottenham the lead just before the interval, and the champions were booed off at half-time when Emerson Royal doubled the visitors' lead moments later.

But City came storming back in the second half, with an Alvarez and Haaland quickfire double levelling the score, before Mahrez gave his side the lead for the first time just after the hour mark.

The Algerian netted again to stoppage time to complete the rout and seal City's first win in three matches.

January 19, 2023 Soccer Comments Off on Hugo Lloris compared to Cal the Dragon after another near post blunder for Spurs
NFL News