How Lionel Messi became a BILLIONAIRE: Argentine star will net £98m this year alone… boosted by eye-watering deals with adidas and Pepsi plus investments such as his own HOTEL in Barcelona

While Ronaldo achieved the feat first, Messi wasn’t far behind in earning $1billion in pre-tax earnings over his glittering 16-year career.

But how exactly has the Barcelona legend amassed such a fortune? Here, Sportsmail takes a look into the Argentine’s mammoth salary at the Nou Camp, along with his numerous endorsement deals and business ventures. 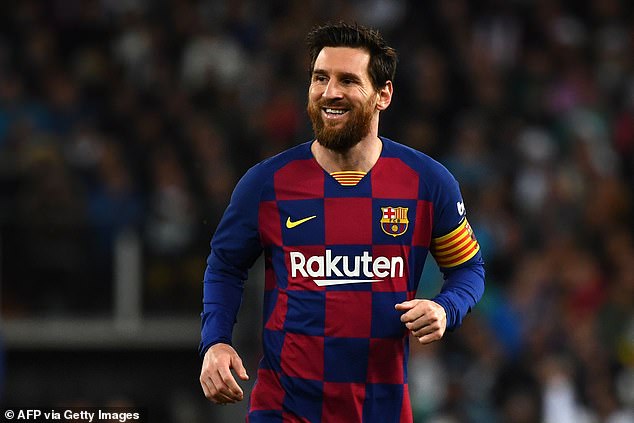 After performing a dramatic U-turn on wanting to leave Barcelona this summer, Messi announced he will stay one more year at the Nou Camp – and it will cost the club a ridiculous amount to do so.

As it stands, Messi’s fixed salary at Barca totals $92m (£71m) but bonuses for signing, for staying, and for winning trophies takes the figure well above that. 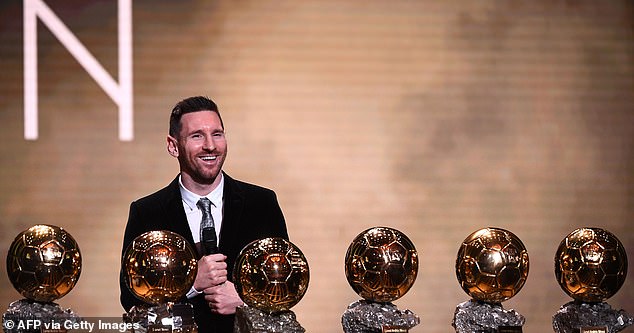 With six Ballon d’Or awards to his name, he’s seen as the greatest of all time and is paid as such

To the Catalan giants, it’s a complete justification for a player who is considered the best ever and continues to be head and shoulders above the rest on a consistent basis.

And it’s been that way for over a decade.

Since breaking into the first team in 2004, Messi played beyond everyone’s expectations and he was paid as such. 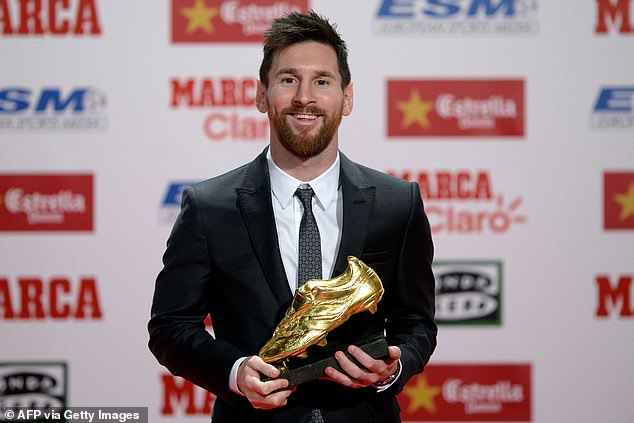 Since then, Messi has gone on to make millions every year and has consistently featured in Forbes’ top 10 highest-paid athletes on a yearly basis.

While the Argentine will bank at least another $82m this year while at Barcelona, he will be sure to earn just as much at wherever he decides to move next.

While Messi is one of the highest-paid players in the game currently, it is his lucrative endorsement deals that have played a big part in him reaching billionaire status.

According to Forbes, the Argentine makes a staggering $32m (£24.8m) from all of his endorsements alone, having signed big-money deals in recent years.

One of his biggest deals came through his partnership with adidas.

Having been sponsored by the sportswear giants in the early days of his career, Messi went on to sign a lifetime deal with adidas in 2017, which reportedly earns him north of $12m (£9m) a year. 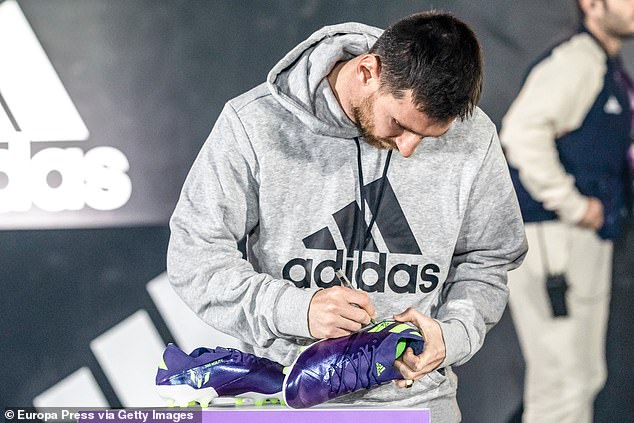 The Argentina star has many endorsement deals, including a major boot contract with adidas 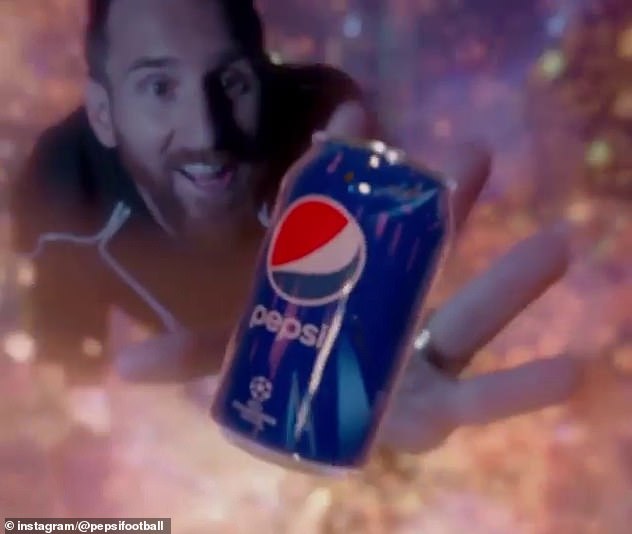 Messi has also appeared in various adverts, including for Pepsi – which nets him $8m a year

He has become the face of adidas and was the first-ever footballer to release a sub-brand of adidas boots, the Adidas Messi in 2015.

But it isn’t just his big-money deal with adidas that put him on his way to earning a billion dollars in career earnings.

The 33-year-old also penned huge deals with Pepsi, Gatorade, Huawei and Mastercard, along with a number of other brands that take his yearly earnings to $32m for endorsements.

Like Ronaldo, Messi has invested a lot of money in businesses as he looks to build on his forever-growing wealth.

In July 2019, Messi released his own personalised clothing range, which saw him partner up with Ginny Hilfiger – the sister of famous designer Tommy Hilfiger.

Messi has also managed to keep his family close with all aspects of his career, with his sister, Maria Sol, playing a key part in the creative process behind his clothing range. 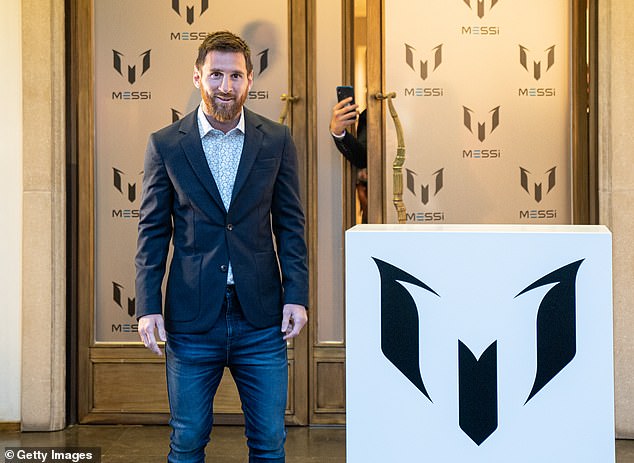 His shop ‘The Messi Store’ features his whole fashion line which provides customers with ‘quality clothes that both a sporty edge’.

Along with his own fashion line, a Messi-inspired theme park was announced in 2017 and is also set to be opened in China later this year.

The theme park will include rollercoasters and the usual attractions along with virtual and mixed reality spaces, holographic technology and performing arts events, which will all be related to Messi and football.

Having branched out into the clothing and entertainment business, Messi also ventured into the hospitality sector, having purchased a four-star hotel in a beach town close to Barcelona. 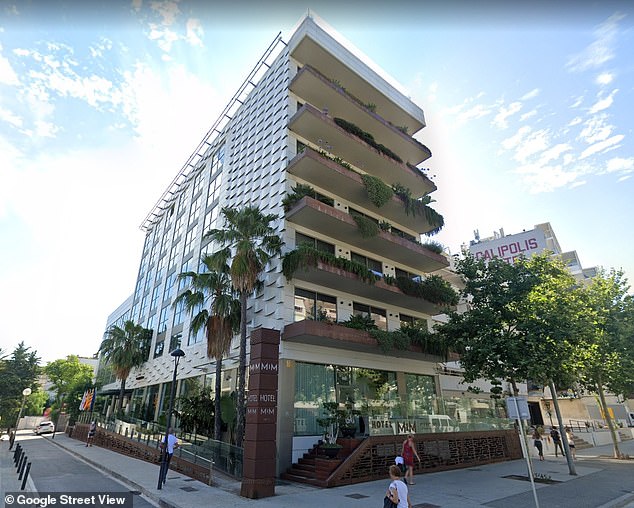 The forward, who also owns hotels in Ibiza and Majorca, bought the luxurious hotel named MiM in 2017 for £26m, adding it to his growing portfolio of real estate.

The hotel, which boasts a panoramic terrace overlooking the sea and stunning views, is situated close to the beach with prices for the 77-room hotel going for 250 euros to 300 euros per night.

Again, just like Ronaldo, it is another business venture that has helped Messi expand his global brand while seeing him reach that billionaire status.