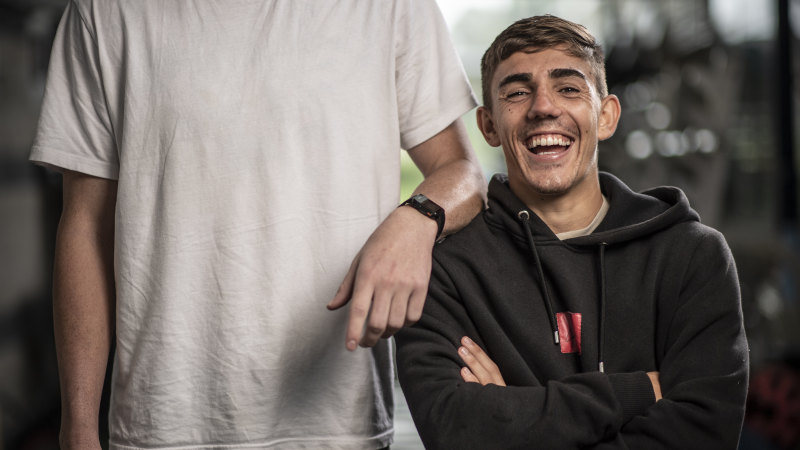 It’s the first thing you notice when you see him. Every single day, without fail, someone brings it up, and he’s already heard every possible joke under the sun. So let’s just get it out of the way early: Josh Nisbet is really short.

At 160cm – just under 5′2″ in the old scale – Nisbet is easily the shortest footballer in Australia, across any code. It’s impossible to watch him play for the Central Coast Mariners without being floored by the significant height disadvantage he gives away. 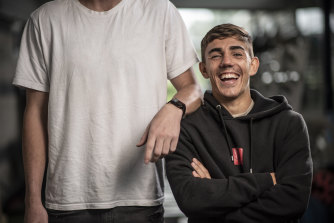 Josh Nisbet has become a core part of a Central Coast Mariners midfield unit that is continually defying the odds in the A-League this season.Credit:Wolter Peeters

What could have been a fatal genetic flaw for his ambitions in professional football, however, has almost become his superpower.

In some ways, the 21-year-old is the embodiment of the unlikely rise of the Mariners, who sit seven points clear on top of the A-League ladder – a player who has been dismissed and overlooked all his life, repeatedly told he’d never make it, but is now making his knockers look silly.

“I reckon there’s people when they just look at me, before the whistle’s blown, they might think, ‘This might be a bit easier than the average day’,” Nisbet said.

“It’s pretty easy to get motivated because there’s so many people you can prove wrong.” 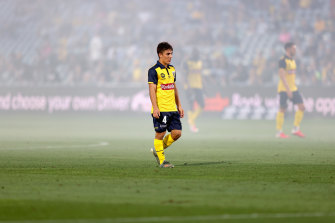 Josh Nisbet makes up what he lacks in size in many other departments.Credit:Getty

Nisbet was born in Penrith but moved to the Sunshine Coast, near the Glass House Mountains, as a child. His parents aren’t exactly skyscrapers, so he always knew he was going to be shorter than average.

But it began to dawn on him, around the age of nine, that he was different to the other kids at school. They all towered over him and it never seemed like he was catching up. 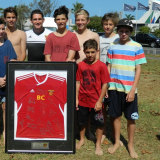 A young Josh Nisbet surrounded by some of his teammates at the Sunshine Coast Fire.

“It was probably once every month, Dad used to line us up against the wall and see how tall we’d grown,” he said. “That was the day I dreaded. I’d come up with excuses not to go to the wall.”

Nisbet got a taste for football early, following in the footsteps of his brother, who was two years older. Their backyard battles steeled him for a lifetime of competing against bigger, stronger bodies, and using his low centre of gravity, smaller turning circle and nimble feet to his advantage.

The talent was always there – the trouble was getting others to look past their first impressions and see it for themselves.

“Kids can be nasty at times,” said his father, Dave. “He’s getting called midget and dwarf, a lot of whispering on the sidelines. He felt that. It definitely burned him. Every level we went to there was always barriers, until the coaches started to get to know him.

“He’s a determined little bugger. He never gives up.”

“Everyone just has their opinion before they’ve even seen you,” Nisbet said. “There was a few times if I didn’t make teams, the first reason was size. To be honest, it’s made me a bit more resilient to some other things in life, knowing not everyone’s going to have your back.”

There was one coach who did have his back, and always has. Ben Cahn was a 21-year-old Englishman who’d just moved to Australia with his parents.

A former academy trainee at Fulham, Cahn started playing local football on the Sunshine Coast and did some junior coaching on the side with a private academy, which is where he first laid eyes on a pre-teen Nisbet, who is almost certain he wouldn’t be a professional footballer without his influence and guidance over the years.

“I remember coaching that group at Coolum Football Club and Niz was about the size of the ball,” Cahn said. “He was just dodging and weaving through everybody. His touch was impeccable. I remember thinking, ‘wow, what a player’.

“I’ve said it to people for a long, long time – Niz has something different to most players. There’s just something about him. When you’re on the training pitch with him, he works harder than anybody. His football intelligence is as high as I’ve ever come across. He watched so much football and studied football. He knows the game, tactically, so well.” 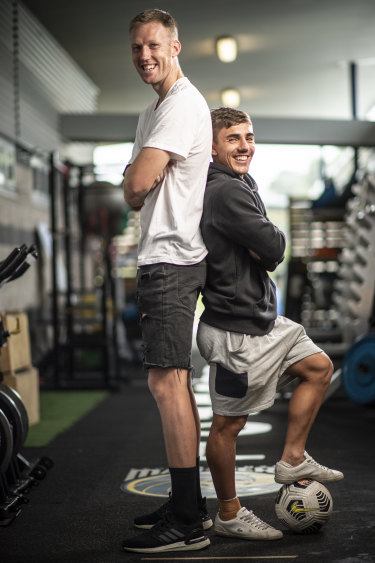 Cahn could see it almost straight away, and would become close family friends of the Nisbets. Even as their football journeys took them to different clubs and in different directions, they’d find time to train together, while his old man always had him doing extras at home.

“We’ve got a three-foot letterbox out the front,” Dave said. “When he was 13, 14, 15, the poor bugger was jumping up on top of that every day just trying to get some spring in his step.”

Nisbet struggled to break into representative teams. When he finally did, in the Queensland under-14s, his coach only used him sparingly because he was worried that the physical loads might further stunt his growth.

Overseas clubs showed far more interest. One team in Spain wanted to sign him at the age of 14, but suggested he take growth hormones. On a separate trip to England – during which he trialled with Wolverhampton, Bolton Wanderers and Cardiff City – an incident happened which may partially explain why he is the way he is.

Nisbet had complained to his parents about soreness in his hip before he left, which got progressively worse through training and matches. One night, as he was stumbling around his hotel room in total darkness, he tripped over his suitcase and landed on his hip.

“That morning, I woke up in crazy pain … lucky it was towards the end of the trip but it got to the stage where it was too hard to play,” he said. “I came home, got checked out, and that’s when I got the news I had a tumour.”

It turned out to be a rare condition called Langerhans cell histiocytosis, which eats away at bone. “My parents were pretty gutted, but luckily it turned out to be non-cancerous,” he said. ”It’s never been confirmed to say that is the reason [why I’m so short] – we don’t know if it was around my whole life or not. But that may have played a part.”

A few years later, Nisbet was in the NPL program of Brisbane City, but hardly progressing. Cahn, meanwhile, was heading up the youth program of the Central Coast Mariners.

“It didn’t look like there was a future there for him. I said, ‘well, you’re coming down to the Central Coast – don’t worry about it,’” Cahn said.

“I said to him, ‘this isn’t going to be an easy ride for you. I’m one of his biggest fans but I said, it’s up to you to earn your own way, regardless of me. It’s up to you to convince everybody else.’

“I remember the first session, [Mariners academy director] Ken Schembri said to me, ‘He’s small.’ I said, ‘yeah, yeah he is, but he’s a good footballer.’ 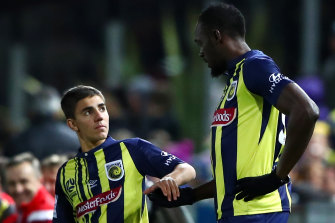 The rest, as they say, is history. Nisbet’s first appearance in Central Coast’s yellow and navy was particularly memorable – he was brought on as a substitute in a pre-season friendly against the then-formative Macarthur FC expansion bid, at the exact same time as a certain Usain Bolt.

The footage of the Jamaican sprint icon, who was trialling at the club, scoring a goal in that match went around the world. But the image of him doubling over Nisbet on the sidelines went straight into the scrapbook.

“I’m glad I’ll have that photo to show my kids, hopefully, and pass the story along. The fastest man alive coming to play football with you – it doesn’t happen every day,” Nisbet laughed.

This season, Nisbet has taken his game to another level, and is a core part of a Mariners midfield unit that is continually defying the odds. On Sunday, they continue their fairytale season at home to the Perth Glory, and Olyroos coach Graham Arnold will be watching closely as Tokyo 2021 draws nearer.

So will Cahn, who now coaches Queensland NPL side Olympic FC – one of the best clubs outside of the A-League – and is patiently awaiting his chance to one day join Nisbet in the top tier.

“I used to say to him all the time, don’t worry about it,” Cahn said. “One day they’ll be looking at you and saying, ‘yeah yeah, we had him in our program, I always liked him’.

“Every time I speak to him, he says he’s received more messages from people that didn’t want anything to do with him in the last 10 years or so.

“I’ve been so attached to him his whole journey. But I’m looking at the praise that he’s receiving for his performances but I know that he’s not even close to where he can be in terms of his potential. I’ve seen it over and over again at every obstacle and as he grows in confidence and starts to believe he belongs at this level a little bit more, there’s even bigger things to come from him.”