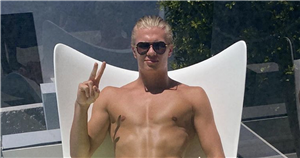 The 20-year-old, who scored 41 goals in 41 appearances last season for the German side, has been enjoying time away from the pitch after his country Norway failed to qualify for Euro 2020.

It has seen him head to the Greek island of Mykonos, snapped partying with Manchester City forward Riyad Mahrez.

But Greek sports outlet Sportime claimed that he was splashing the cash in a big way to celebrate during his time away from football.

Haaland, who reportedly earns £140,000 a week at Dortmund, apparently enjoyed a meal with friends that lasted ‘over five hours’.

With several courses being put on the table, the outlet said it saw the youngster spend £430,000 – which included a ‘hefty tip’ of what would have been £26,000.

But the 20-year-old took to his Twitter channel soon after the news was shared, calling out the newspaper by making a damning statement.

Writing on his Twitter channel, the Dortmund forward said: “'I think they forgot the main course. Fake news.”

Where do you think Erling Haaland will be playing football next season? Let us know in the comments section.

Haaland also added a clown-face emoji and face-palm emoji as he slammed the news coverage.

The Norwegian was said to have been enjoying his holidays at a complex called Nammos, located next to the beach at Mykonos with luxury shops and restaurants.

And the total figure he payed is believed to have covered the meal, a rented car and the tip.

Haaland is enjoying the time away as he could be very busy on his return to the Westfalenstadion, with the 20-year-old expected to make a mega-money move this summer.

With 133 senior goals for club and country, it has seen Manchester United, Manchester City and Chelsea all get linked with the forward.

But it seems that Real Madrid may beat all three Premier League sides to the goal-scorer’s signature after the parties reached a “total agreement” earlier this month.