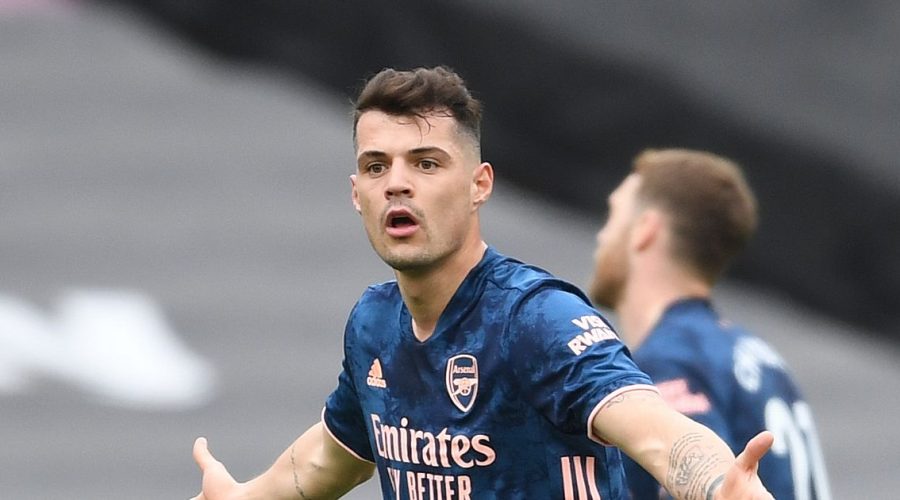 Granit Xhaka has vowed he 'will not be broken' by his critics after claiming he is wrongly targeted over his less-than-perfect disciplinary record.

The Swiss midfielder, 28, has endured a difficult time at Arsenal since his £30million transfer in 2016 and has often been maligned as one of the weak links in the Gunners' side.

Controversy never seems to be far from Xhaka either, with his petulant outburst at the club's fans during their clash with Crystal Palace in 2019 a case in point, while his tendency to be sent off at crucial times has regularly irked Arsenal fans.

Xhaka has only received his marching orders on three occasions for the club, but the latest of which – a straight red card against Burnley back in December – proved costly.

Yet he feels his record is judged unfairly against that of some of his peers.

“You have to live with criticism in football, but there have to be limits," he told Blick.

“There are other players who get red cards, but they don't get criticised as much as I do.

“I sometimes feel that with me it is deliberately made into a bigger issue than it really is.

“But it won't break me. I overcome it, and this time it has made me come back stronger – no doubt to many people's surprise.”

Few could deny Xhaka has proved his doubters wrong with some of his performances this season, particularly when paired alongside Thomas Partey at the base of Arsenal's midfield.

It's almost a given that bookings are part and parcel of a defensive midfielder's day job, with Xhaka now on eight for the season in all competitions, along with his solitary red.

Six of those yellows have come in the Premier League this term, placing Xhaka in the upper tiers of the division, though he is still two behind teammate Hector Bellerin who leads the way on eight.

And Xhaka's stats are not out of tandem with other players who occupy a similar role, with the likes of N'Golo Kante, Abdoulaye Doucoure, Luka Milivojevic, Pierre-Emile Hojbjerg and John McGinn all on the same or a higher amount of yellows for the campaign.

Still Xhaka has been made a scapegoat for Arsenal's shortcomings in the past, including receiving abuse online, but he has had the full backing of his manager Mikel Arteta.

“It’s not just the Burnley game [that he got abused for],” Arteta said last month. “He’s had two big episodes, you know. You can maybe overcome one of those, I think the second time he really showed that he doesn’t want to go through that again.

“We’re here to try and support our players, the club was exceptional giving him all the support. We try to do the same, the teammates did the same.

"He’s gone through it again. He’s getting a lot of praise for the way he’s playing. It’s down to his character and how much he wants to succeed at the club.”

Arteta added: "I think he has matured a lot as a player and he has a big importance in the dressing room. On the pitch, he’s doing things much, much better than before.”