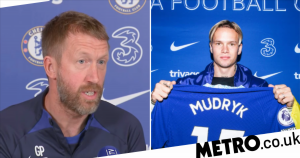 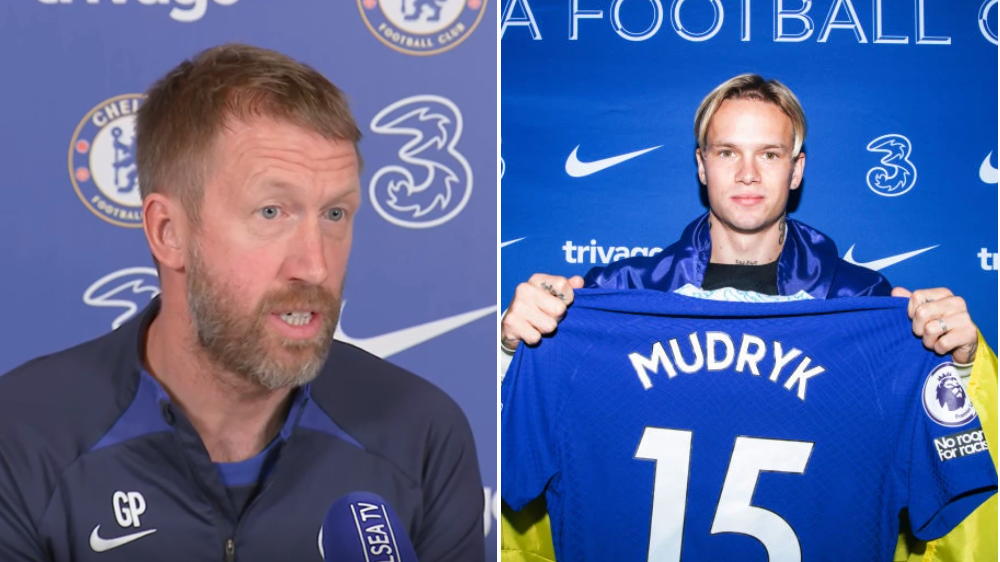 Graham Potter has been impressed by Mykhailo Mudryk’s first week at Chelsea but has warned fans that he needs time to ‘adapt’ as he considers handing him his Premier League debut.

Chelsea completed an £89m deal for Mudryk last week and the Ukraine forward has been training with his new team-mates ahead of Saturday’s trip to Liverpool.

Mudryk was in talks with Arsenal before Chelsea hijacked the move and secured his services on an eight-and-a-half-year deal.

Potter insists Mudryk could make his Chelsea debut at Anfield this weekend but says he wants people to ‘understand’ that the 22-year-old will need time to adapt to his new surroundings and Premier League football.

‘He is a young and exciting player, we have to help him adapt to us and the Premier League,’ Potter said at his pre-match press conference.

‘He hasn’t played so much football recently but has been training well, so we will have to assess him. There’s a chance [he could make his debut]. There is probably a role for him at some stage in the game.

‘We’ve got to help him and everybody understand that he is coming from a different country and league and has to adapt.

‘He is a young player who has a lot of potential and at the same time he has had good experiences already and he is an exciting player.

‘He’s trained very well and is very happy to be here. He is looking forward to his career here and is excited to get started.’

Mudryk scored seven goals in 12 league appearances for Shakhtar this season before completing a big-money move to Chelsea.

He joins a Chelsea side who are just 10th in the Premier League – 10 points outside the Champions League places – ahead of this weekend’s round of fixtures.

‘We’ve been through a really tough time but are still together as a club. That is very positive,’ Potter said.

‘There are things to look forward to in terms of players coming back from injury. The understanding we have together has improved because of the time we’ve had. We just have to focus on the next game.’

Chelsea are preparing to face a Liverpool side who are just one place above the Blues in the Premier League following a similarly poor run.

Asked what he expects from his team in the second-half of the season, Liverpool boss Jurgen Klopp said: ‘Consistency, in a good way. We have to defend to an incredibly high level, which will allow us to create chances.

‘The game against Wolves is a good example. That looked like what we have to do; we have to defend together. Everybody.

‘It is nothing to do with style; if you have the deepest defence and you’re all together, that’s intense.’