A new era will begin for the Matildas in the early hours of Sunday morning when they play their first match under new coach Tony Gustavsson but captain Sam Kerr is already praising his style of play as “music to my ears”.

It won’t be a drastic change to the Matildas manner of old when they face Germany in a friendly in Wiesbaden but their first outing under new leadership looks to showcase an even more aggressive philosophy. 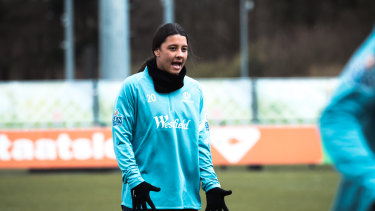 The major renovations have been put on hold until after this year’s Olympics but their Swedish coach has wasted no time in his first camp making clear what he wants to see in his first game.

“It’s all about goals, goals, goals. That’s music to my ears,” Kerr said. “It seems to me it’s going to be about how we get the ball in the back of the net. I think that’s really exciting and it’s going to take time to get used to as we’ve come from a really big football playing style.”

After spending years playing a possession-based attacking system, the Matildas will become more direct in front of goal. As basic a philosophy as it might sound, Gustavsson explained to the squad he is simply playing to Australia’s strengths.

And when you talk about Australia’s strengths, you don’t need to go too far past Kerr.

The Western Australian sharpshooter is in lethal form for her club Chelsea. She’s netted 17 goals in 16 starts in the Women’s Super League in England, making her the joint top scorer and furthering her status as one of the deadliest strikers in world football. In the last month alone, Kerr has banged in two hat-tricks.

The Matildas’ more direct approach to goal will place a greater onus on her replicating her club form for her country. However, if there is any pressure weighing on her shoulders, she isn’t feeling it.

Instead, she is relishing the prospect of having more scoring opportunities and with the calibre of attacking players around her, such as Caitlin Foord, Emily Gielnik and Hayley Raso, Kerr believes the Matildas forwards will share the burden of scoring. 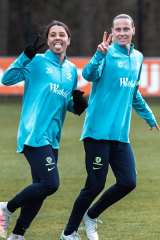 “It doesn’t matter if you’re an attacker or defender, it’s about everyone getting in a position to score a goal. Of course us attackers will have more and more chances so with that comes a little bit more pressure to score more goals,” Kerr said. “I don’t think there’s more pressure on anyone in particular, I just think it’s that the team expects more goals and expects more quality up front.”

That Kerr isn’t concerned about the added expectation is because of her rapid development since moving to Chelsea just over a year ago. She had to adapt to a new environment, different style of football and heightened tactical approach. Not to mention an often sceptical, but now silenced, English football community.

“I have had to find a balance between having new skills and look on the way I play and keeping what I am good at,” Kerr said.

Admitting she could afford an off-day at training in the W-League, the battle for positions at Chelsea means she has had to perform at her best just to avoid being dropped.

Kerr said the quality of defending is better in England while the tactical preparation is something she never experienced at clubs in Australia and the US. She’s had to adapt, but quickly learned how to best use one of her greatest assets. 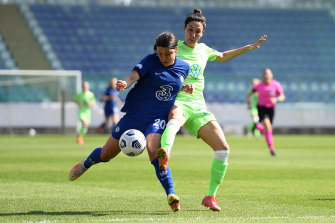 Sam Kerr has been in red-hot form for Chelsea.Credit:Getty

“I knew I was fast but now I know how to use that speed to my advantage and really get at defenders and really scare them,” Kerr said. “I have had to learn how to hold the ball up more, the game is a little bit slower but a bit more tactical, the space in behind is a bit smaller.”

The core of the Matildas left the W-League for Europe in the past 12 months allowing Gustavsson to select an entirely overseas based squad for the upcoming friendlies against Germany and The Netherlands.

It’s the first time the Matildas have assembled since the start of the COVID-19 pandemic and Kerr said there is a noticeable spike in the quality of training sessions now the majority of her teammates are playing in Europe’s best competitions.

“I have noticed a difference in players. The biggest thing is fitness,” Kerr said.

“Even people like [Foord], I was having a laugh with her yesterday. I haven’t played with her in a year and she’s whacking balls into the top corner. You don’t see people regularly and you see what people have been doing day to day and it’s coming off.”

It’s why the emphasis on scoring goals and Gustavsson’s direct philosophy doesn’t concern her. Kerr’s role won’t change: she will remain the focal point of Australia’s attack, but not its sole outlet.

With the Matildas riding the wave of progress in women’s football in Europe, she doesn’t see Gustavsson’s demand for goals as a tall order.