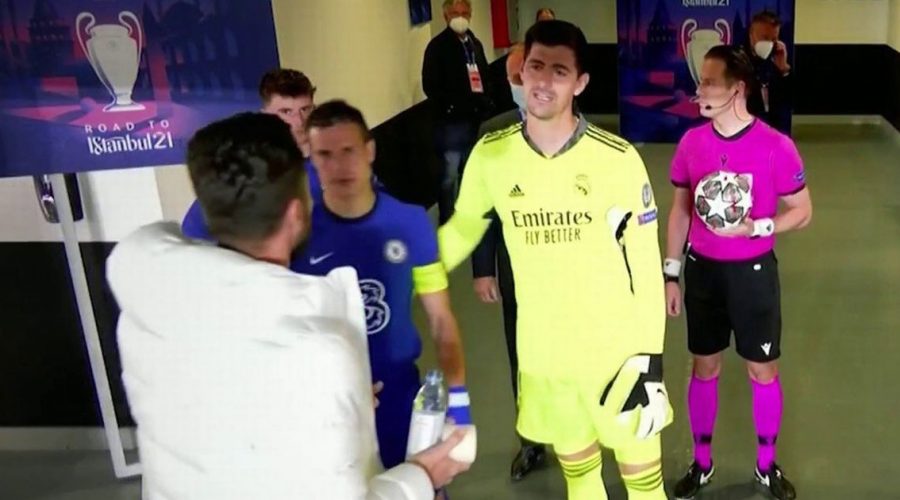 Chelsea striker Werner had another night to forget as he registered his latest missed sitter.

The £47m summer signing found himself just six yards out and in a prime position to score, but he could only fire the ball straight at Real Madrid goalkeeper Courtois.

That led to a host of talk, including in the tunnel it seems, as Giroud, who was an unused substitute on the night, had a brief chat with former team-mate Courtois while the players were waiting to go out for the second half.

The RMC cameras caught the pair talking, while the referee, Cesar Azpilicueta and Mason Mount watched on.

And it is claimed that Giroud said: “The save on Timo! Pffff…”

Courtois played it down though, replying as he moved his foot a little to the right: “All I did was put my foot out like this.”

The Champions League semi-final tie is now poised on a knife-edge going into the second leg after a 1-1 draw in the Spanish capital.

And Chelsea boss Thomas Tuchel insists that Werner will bounce back after a string of embarrassing misses.

"But it doesn't help crying about it or regretting it all the time.

"There are millions of people who have harder things to deal with than chances that you miss. So the good thing about sport is that no one cares tomorrow, today we were sad and angry in the moment – this is normal. He is sad, he is angry and disappointed.

“Tomorrow he has a free day and the next day he must put his chin up. He's a top guy, a professional guy.

“He works hard. He's in the positions. He will not stop believing. Everyone accepts the situation like it is. With strikers, if you score the next game, nobody speaks.”

READ MORE:Eden Hazard is 'still friends' with Chelsea players – but is desperate to see them lose