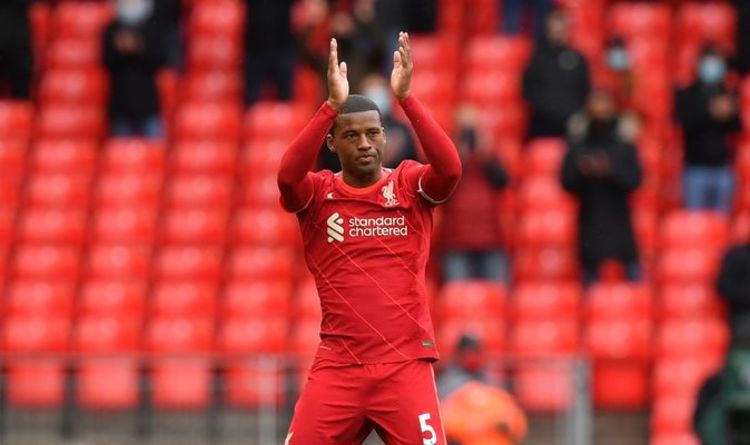 With Manchester United signing Cristiano Ronaldo, Chelsea bringing in Romelu Lukaku and Manchester City forking out £100m for Jack Grealish, Liverpool’s lack of a marquee signing raised eyebrows. The Reds bought in defender Ibrahima Konate of RB Leipzig, but that was all. Instead, they allowed Georginio Wijnaldum to leave the club for free, a deal many fans were unhappy with.

Although defensive reinforcements were certainly required after an injury-ridden 2020/21 campaign, a midfielder was thought to be on Jurgen Klopp’s shopping list too.

The German manager has instead opted to put faith in Thiago Alcantara and Naby Keita, who both haven’t set the league alight since arriving from the Bundesliga.

Wijnaldum, who missed just one game in Liverpool’s title win in the 2019/20 campaign, left for Ligue 1 side Paris Saint-Germain over the summer.

But although he was an integral clog in that Liverpool side, it has been revealed that the Netherlands international felt he was not wanted in Merseyside.

Speaking to L’Equipe, the 30-year-old said: “You follow your feeling.

“Several months ago, I had expressed the desire to stay in Liverpool but, without going into details, Liverpool did not give me the feeling of wanting to keep me. In these cases, we have to move forward.”

Wijnaldum missed 11 games over the course of five seasons at Anfield since arriving from Newcastle in 2016 for £25m.

In the heart of the midfield, the former PSV man led by example and worked incredibly hard for his team, charging forward to be a presence in the final third but also racing back to help out his defence.

The 2018/19 Champions League winner continued: “Barcelona came. I was really happy because, since I was a child, as for the majority of Dutch players, it was the club of my dreams even if I must admit that my idol was Zinedine Zidane.

“I had a good idea to commit to Barca. But the negotiations lasted a very long time and Paris came in.

“Unlike six years earlier, the club showed me their desire to recruit me. It was time for me to have something else.”

Wijnaldum has made four league appearances since arriving in Paris, having the opportunity to play with Neymar, Kylian Mbappe and six-time Ballon d’Or winner Lionel Messi.

Hearing that Liverpool weren’t keen on keeping the central midfielder at Anfield will be a shock to many.

However, there were numerous rumours linking Klopp’s side with other midfielders, and they may have their eye on a certain Borussia Dortmund midfielder.

According to the Daily Star, 18-year-old Jude Bellingham is of serious interest to the Reds and they are willing to bid £80m for him.

The young Englishman made 29 appearances in the Bundesliga last season, scoring once and assisting three times, with his consistently superb performances leading him to being called up by Gareth Southgate for England’s Euro 2020 squad.

September 14, 2021 Soccer Comments Off on Gini Wijnaldum claims he ‘was not wanted’ at Liverpool as new details on exit emerge
NFL News