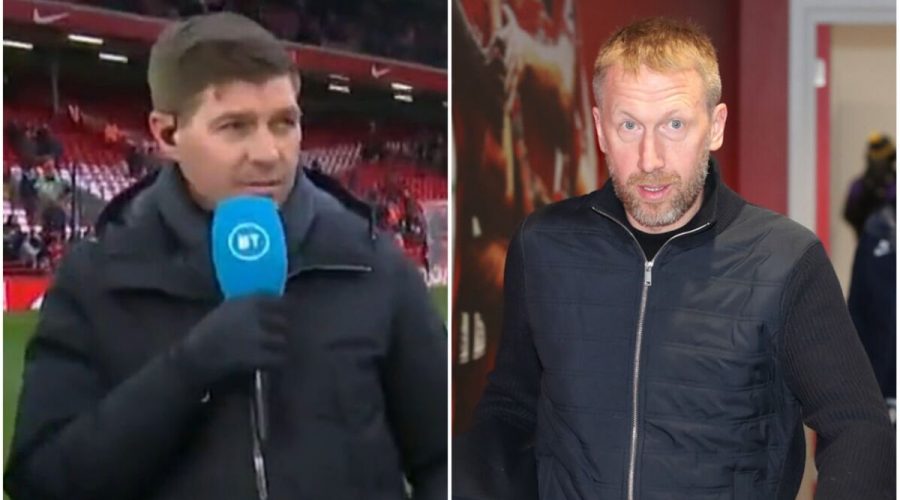 Liverpool legend Steven Gerrard has suggested that Graham Potter may be avoiding responsibility for Chelsea’s recent signings. Supporters who made the voyage to Anfield on Saturday are hoping to get a look at £88million-man Mykhaylo Mudryk, who was snapped up from Shakhtar Donetsk earlier this month.

Potter has faced tough questions during the early stages of his Chelsea career. In an attempt to relieve the pressure and propel the Blues up the table, the club’s hierarchy have splashed out on new recruits this month, including the highly-sought-after Mudryk.

Speaking ahead of his former club Liverpool’s clash with Chelsea on Saturday, Gerrard claims to have noticed subtle hints dropped by Potter that others at Stamford Bridge are behind the signings, while questioning the need for such frivolous transfer spending.

“I’m not sure [if there is a strategy],” Gerrard told BT Sport. “Listening to Graham Potter’s interviews there’s little nuggets in the interview that he’s not taking responsibility for every signing here, he’s saying it’s more a collective in terms of the decision-making here.

JUST IN: Tottenham hero admits surprise at signing that Conte ‘does not want’

“I think you’ve got an owner that’s in a rush for success, you’ve got a manager that wants a bit more patience and to build something special here – I think he’s more than capable – but for me the concerning thing is that they seem to be reacting off recent results.

“You look at January alone they’ve broke their record again – what is it, close to £150 million? When is it going to stop? So are they going to have a positive six months now until the end of the season or are they going to go and spend another £200 million?

Chelsea were expected to push the Premier League’s heavyweights this season after smashing the record for amount spent by one club in a single window during the summer. Potter, and indeed Thomas Tuchel before him, have struggled to get the new contingent to gel, however, which has seen the Blues slip to 10th in the table prior to kick-off at Anfield.

Supporters will hope that Mudryk can help to turn the tide in west London, as a player tipped by Shakhtar Donetsk chief Darijo Srna to be one of the finest wingers on the planet. He has notched five goal contributions in six Champions League matches this term but has not played competitively since November.

Chelsea co-owner Todd Boehly was in charge of transfer during the summer but Potter is now backed up by an experienced transfer team, comprised of technical director Christopher Vivell and head of recruitment Paul Winstanley.