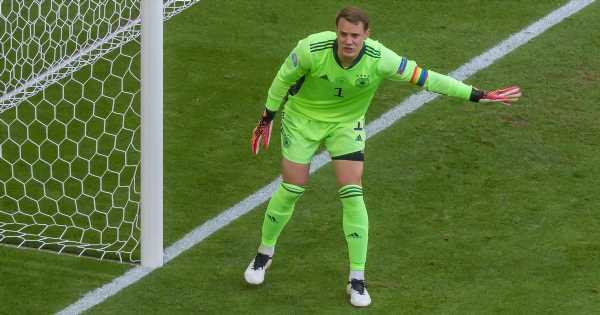 Manuel Neuer could face a fine from UEFA for wearing a rainbow-coloured captain's armband during Germany's clash with Portugal on Saturday evening.

Neuer – who is Germany's captain – donned the armband in support of Pride Month, which runs throughout June, and the LGBTQ+ community.

However, Neuer may have fallen foul of UEFA's rules against political gestures, and the footballing body – according to German-outlet NTV – have opened proceedings against the DFB and the shot-stopper.

Neuer also wore the armband against France, and in a pre-tournament friendly against Latvia, however, it's only now UEFA have decided to launch an investigation.

Budapest could be awarded the final after British Prime Minister Boris Johnson refused to waive quarantine rules for UEFA VIPs after England's lockdown restrictions were extended.

She tweeted: "My thoughts are with the people of Hungary but especially the various LGBT communities in the country.

"The football world has another opportunity to step up. I hope that @UEFA will take this seriously and reconsider moving more Euros games to Budapest. Equal game?"

Should Neuer be allowed to wear the armband? Let us know in the comments section

The regulations restricting the displaying of political slogans on clothing are contained in Law 4 of the Laws of the Game.

And it's not the first political gesture UEFA have tackled at this year's tournament after Ukraine released a home shirt featuring the annexed region of Crimea.

July 2, 2021 Soccer Comments Off on Germany’s Manuel Neuer could be fined for rainbow armband as UEFA investigate
NFL News