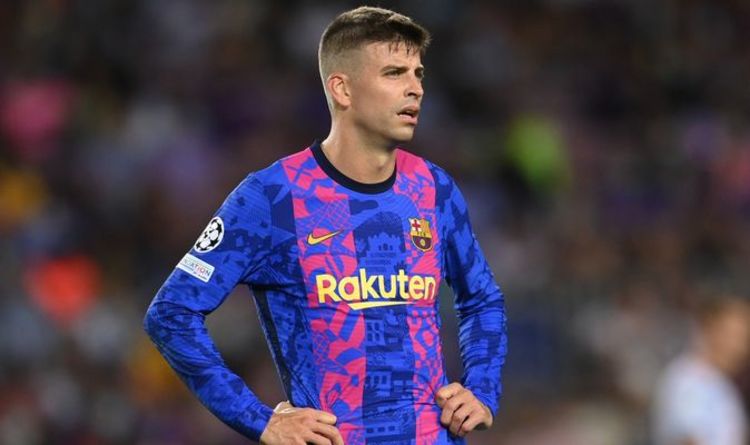 Gerard Pique’s brutally honest comments showed how far Barcelona had fallen after they were beaten 3-0 by Bayern Munich. Bayern didn’t need to get out of third gear in their win over Ronald Koeman’s side, who were playing their first Champions League game since Lionel Messi joined Paris Saint-Germain.

Thomas Muller opened the scoring for the Bundesliga giants in the first half with an effort that deflected off Eric Garcia’s back, before Robert Lewandowski’s second-half double completed the trouncing.

Since then they have suffered financial problems which saw them unable to hand Messi a new contract.

And they ended the game with four teenagers on the pitch as their lack of squad depth and top-class experience was exposed by Julian Nagelsmann’s side.

Afterwards, Pique was honest about Barca’s predicament, with the defender saying: “We competed in the first half, Bayern took the lead with a deflected goal.

His centre-half partner Eric Garcia was less philosophical, believing Barcelona had been unlucky.

“I think the scoreline is unfair,” said the former Manchester City defender.

“The first goal deflected off me, the second goal came back off the post and fell to Lewandowski.

“I don’t think we should have lost by such a big scoreline.

“If we didn’t hold the ball in midfield enough, at the end of the day, we were playing Bayern – maybe the best team in Europe. We knew it was going to be really tough.”

Meanwhile, Pique hit out at fans who booed Sergi Roberto following his below-par performance on the right flank for Barca.

Roberto was jeered as he walked off after being substituted, and Pique said: “The whistles towards Sergi Roberto are hurtful.

“I would like to remind people that he is a midfielder, not a winger. He has made a sacrifice to adapt to that position on the pitch.

“People are free to express themselves but I do not like the whistles, they do not help.

“I know the person, he is a spectacular human being and he wants more than anything for this club to be successful.”

Pique said there were still reasons to be optimistic, adding: “We have people like Ansu (Fati) and (Sergio Aguero) Kun who can improve us.”