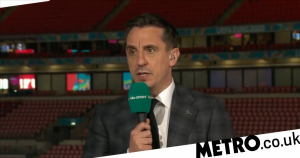 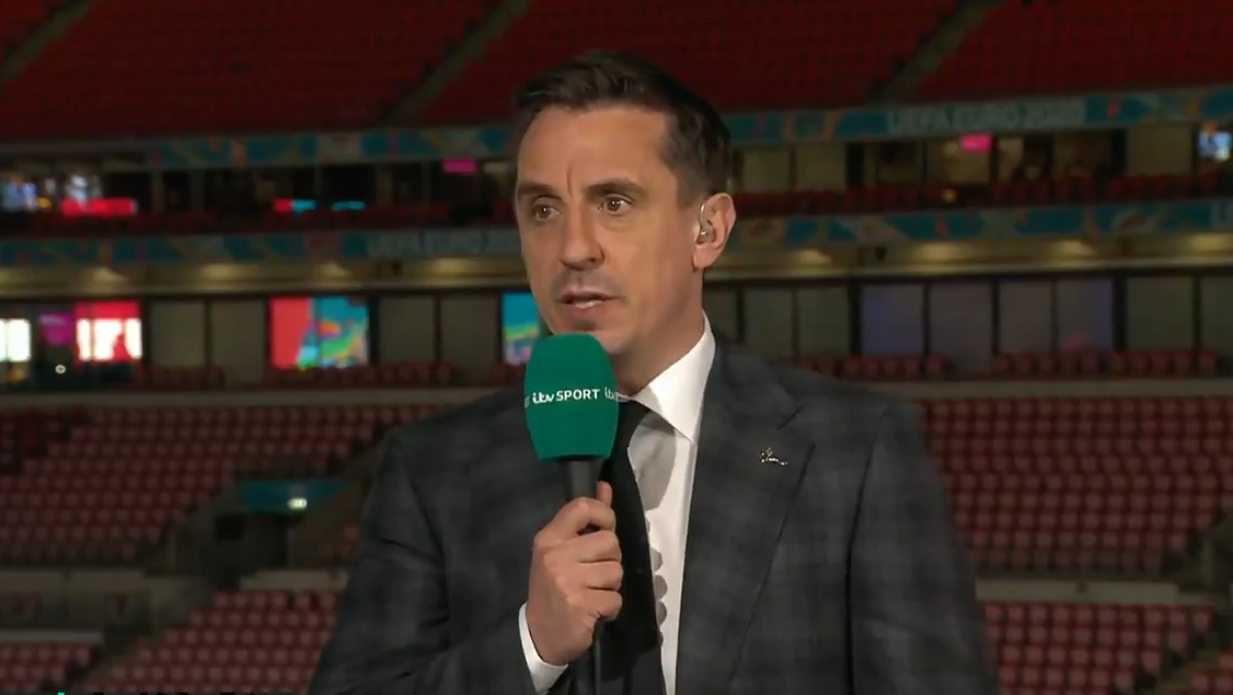 Former Manchester United captain Gary Neville feels ‘really confident’ about England’s Euro 2020 chances but has warned that Gareth Southgate’s side will not ‘outplay’ the best teams in the tournament and can only compete by playing the same measured football which saw them top Group D.

Wins over Croatia and the Czech Republic and a draw with Scotland was enough to see the Three Lions finish top of Group D on seven points. Up next for England is a last-16 clash against either holders Portugal, World Cup champions France or three-time winners Germany.

While England only scored two goals during the group stages, they are yet to concede and Neville believes this ‘professional’ approach is their best hope of winning the European Championships for the first time.

Speaking after the 1-0 victory over Czech Republic at Wembley on Tuesday evening, Neville told ITV Sport: ‘I’ve been part of England teams where the group stages have been an emotional rollercoaster, a circus almost.

‘If this was Germany or another country we’d look at them and think, “they look calm and in control”. We don’t think like that because we’re England and we always want more, we want the brilliance.

‘But I feel really confident about this group and I do trust the manager, he knows their capabilities and knows how they can win games. It’s a massive game next week and they’ve got a week to prepare for it. I’m looking forward to it.’

‘England aren’t going to win this tournament by outplaying France, Germany, Portugal and Spain. I don’t think we have the players to do that. We have good players.

‘I genuinely think we will win it in the way we are playing now which is professional, by keeping clean sheets, making sure the back is protected by the two in midfield and then creating those individual moments of brilliance.

‘Don’t be surprised if we play Germany or France we go to five at the back because I think we may need more than four defenders against [Kylian] Mbappe, [Antoine] Griezmann and [Karim] Benzema.

‘If you are playing against Germany we can comfortably go to wing backs, I don’t rule anything out at this stage but I can’t see that Gareth [Southgate] will play the same way against the Czech Republic as he would against France or Germany.’

England’s last-16 opponents will be confirmed tomorrow when Group F concludes but Southgate insists he has no preference over who his team face in the next round.

‘To win a tournament you have to beat those teams,’ the Three Lions boss said. ‘We wanted to make sure we won the group and stayed at Wembley.

‘We don’t know if that is advantageous in terms of where the draw will take us but we would rather be here, we could have come second and still have had a really difficult draw.

‘To win the group is good for confidence and it is great our fans will see us in the next round here.’