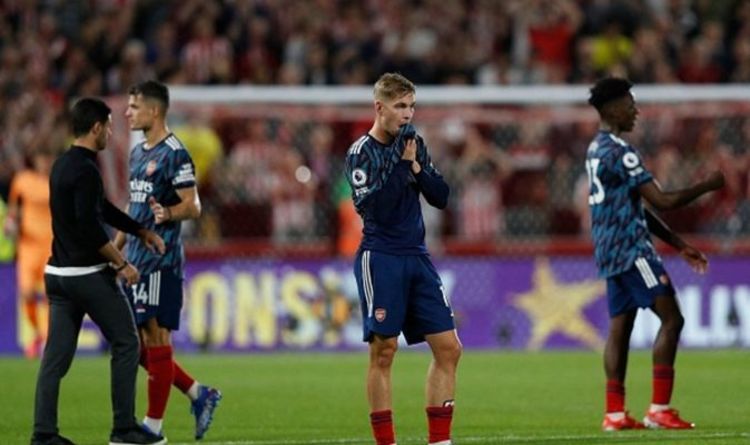 Gary Neville gave a scathing verdict on Arsenal, with goalkeeper Bernd Leno coming in for particular criticism following the 2-0 defeat to Brentford on Friday. It was a highly disappointing start for the Gunners, who are looking to get back into Europe next season after missing out last term.

Goals either side of half-time Sergi Canos and Christian Norgaard secured all three three points for the Bees in their first top flight game since 1947.

But Mikel Arteta will know there is plenty of work to do be done if Arsenal are to get back into Europe next season.

One man who came in for heavy criticism was German stopper Leno, who was far from his best in truth.

For Brentford’s second goal, Leno allowed the ball to bounce across the six yard box before it was put away.

And Neville admitted that he believes the Gunners were “bullied” by Premier League new boys Brentford.

“I’ve got a really strong opinion on this,” he said on Sky Sports. “I can’t have it that a keeper gets blocked from the beginning, honestly there get out of my way I’m the dominant one. Don’t get blocked.

“You can argue he’s been fouled a top keeper doesn’t get fouled, Alisson gets out and punches it. Schmeichel does the same.

“A game is really difficult if your defenders are getting messed around and they did that for minute one.

“Once your defenders, goalkeepers getting messed around and there’s nothing worse than thinking your team are little bit soft.

“Arsenal fans will come from away from here thinking ‘we’ve been bullied here’.

“In the modern game, that is being bullied, Brentford looked and thought yeah we’ll have you. It’s the worst feeling if you’ve been physically outdone.”

Morgan took to Twitter to air his frustrations at Arsenal’s performances in an outburst on social media, also admitting his beloved side were bullied.

“This is pathetic,” he wrote. “We’re being bullied off the park by a team of players who’ve never performed in the Premier League.

“Even by Arteta standards, a new low. I can’t do this for the next nine months.”

Morgan later added: “To be fair to Arteta, he did say Arsenal would surprise everyone this season – and they have: we’ve got worse.”