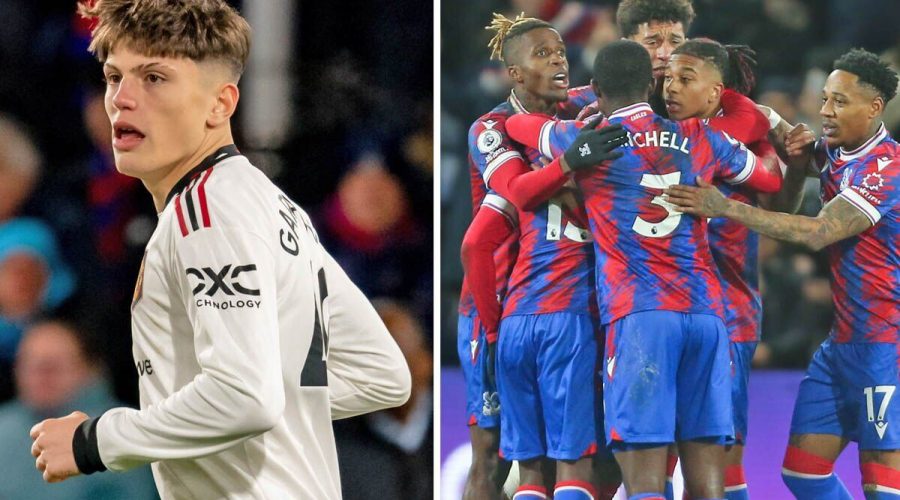 After Manchester United’s 1-1 draw with Crystal Palace on Wednesday night, Alejandro Garnacho stood on the pitch looking dejected. With his hands on his hips, and head down, he was clearly unhappy following Michael Olise’s late free kick. And it seems like he knows it was a big chance missed for his side, especially with Arsenal up next on Sunday afternoon.

Manchester United had gone into their game with Palace looking to continue their 100 per cent winning record since the World Cup in Qatar.

And, for a while, it looked as though they were going to get the result they wanted after Bruno Fernandes opened the scoring.

The United star opened the scoring in the 43rd minute, sparking wild celebrations in the away end in the process.

But the Red Devils were pegged back in the closing stages, with Olise curling a sensational free kick into the top corner and beyond the reach of David De Gea.

While Palace deserved their draw, it was a big chance missed for United as they look to win the Premier League title for the first time since 2013.

Victory would have moved them to within three points of Arsenal at the top of the table ahead of Sunday’s blockbuster clash between the two teams.

Instead, the Red Devils remain eight points adrift of Mikel Arteta’s team – having played one match more than their rivals, too.

At the final whistle, Garnacho was snapped looking dejected with his hands on his hips and his head down.

And that sums up the mood at United, who will consider the match two points dropped rather than one earned.

It was certainly a frustrating night for the Red Devils and manager Erik ten Hag, who was seen shaking his head at the final whistle.

Antony continues to blow hot and cold, despite his five goals this term, with the Brazil international infuriating in attack.

Marcus Rashford saw his recent goalscoring run come to an end, with the England international uncharacteristically flat up top.

And Casemiro’s yellow card was a cruel blow, too, with the midfielder poised to miss Sunday’s match with Arsenal as a result.

“That wall was never big enough. Always going to shoot!” he said on Twitter following the game.

“Put the taker off !!! A massive wall with big players in makes it more difficult for a taker! That wall lacked presence and made it look inviting!”

And Ten Hag admitted he was unhappy with United’s failure to see out the game, bemoaning their lack of attacking edge.

“We had control of the game. We had to invest more in the second,” he said.

“At 2-0 it would be over. Then you get hammered with an unlucky moment.

“We were 1-0 up. In the second half we had a lot of space to kill them and go for the second.

United will go into Sunday’s match with Arsenal hoping to beat the Gunners for the second time this season.

Back in September, they ran out 3-1 winners in the fixture at Old Trafford with Antony opening the scoring.

Arsenal had looked set to claim a point during the game at Old Trafford after Bukayo Saka chalked off Antony’s strike.

But a late double from Rashford ended up giving the home side all three points on a positive afternoon on home soil.

January 19, 2023 Soccer Comments Off on Garnacho sums everything up after Man Utd draw with Crystal Palace
NFL News