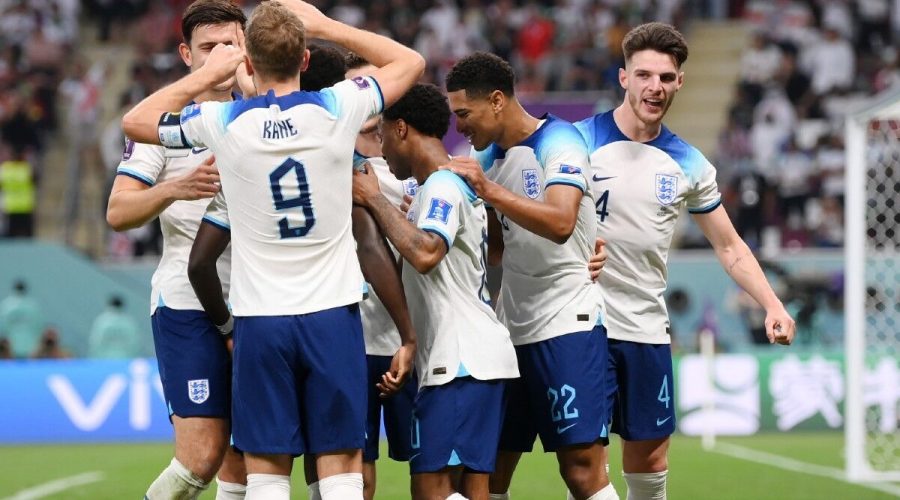 England cruised to a 6-2 win over Iran to give their World Cup lift-off on Monday afternoon. Jude Bellingham, Raheem Sterling, Marcus Rashford, Jack Grealish and a brace from Bukayo Saka ensured the Three Lions pick up all three points. And Express Sport will now take a look at four things we spotted from the Khalifa International Stadium as they got their campaign off to a positive start.

Just before England’s game with Iran got underway, Harry Kane had to remind Sterling that they were taking the knee.

The Chelsea star appeared to be looking at the fans around him before belatedly realise what the rest of his team-mates were doing and acting appropriately.

Though taking the knee is no longer as regular an occurance as it once was in the Premier League, it’s still an important gesture nonetheless.

And Sterling was a man on a mission early on against Iran, with the Chelsea forward bagging his side’s third goal of the game.

He’s certainly endured a troublesome start to life at Stamford Bridge but this bright performance certainly bodes well for the rest of the tournament.

There’s been plenty said and written about how many England fans would jet out to Qatar to watch the World Cup unfold.

But those inside the ground against Iran were in fine voice and, as ever, produced some of their usual banter.

England fans could be heard singing their own rendition of ‘Jingle Bells’ to remind everybody that, though the World Cup is creeping closer, Christmas is as well.

It was certainly a party atmosphere as Gareth Southgate’s team sent out a statement to the rest of world football.

And England supporters will be hopeful of singing more songs of celebration when they lock horns with the United States in their next game.

Ever since landing in Qatar on Friday, Express Sport have witnessed some impressive light shows.

Fireworks, in particular, seem to be popular with the Middle Eastern nation capable of putting on some memorable displays.

But, at half-time of England’s win over Iran, they also put on a stunning show inside the ground.

Most of the fans were plunged into darkness, with bright, flashing lights then going off while loud music played in the background.

Somehow, in rainy England, we can’t see this catching on in the Premier League…

There was tension in the air when, early in the second half, Harry Kane went down after a crunching tackle.

The Tottenham striker, who will be key to the Three Lions’ hopes of glory, was on the turf for a few minutes and looked to be in discomfort.

There was tension in the press box as everybody waited to see what would happen with the 29-year-old, who was wearing the FIFA armband after the Three Lions’ decision not to wear the OneLove one.

Fortunately, however, journalists and broadcasters got the good news they needed.

Kane was right enough to continue and he’ll be hoping to open his account against the USA on Friday (10pm). He did eventually come off, but that was with the match already won.

England were always going to be favourites against Iran.

And while not too much can be read into the straightforward win, it certainly bodes well for what’s to come.

England look ready. They didn’t a few months ago, when matches in the Nations League were playing out and while they conceded, it was only a slight dampener on a positive night at the office.

As for Iran, they’re 20th in the world (according to the FIFA rankings). That means they’re not the minnows that many see them as.

They’ll need to bounce back when they face Wales, with that match also pencilled in for Friday afternoon.