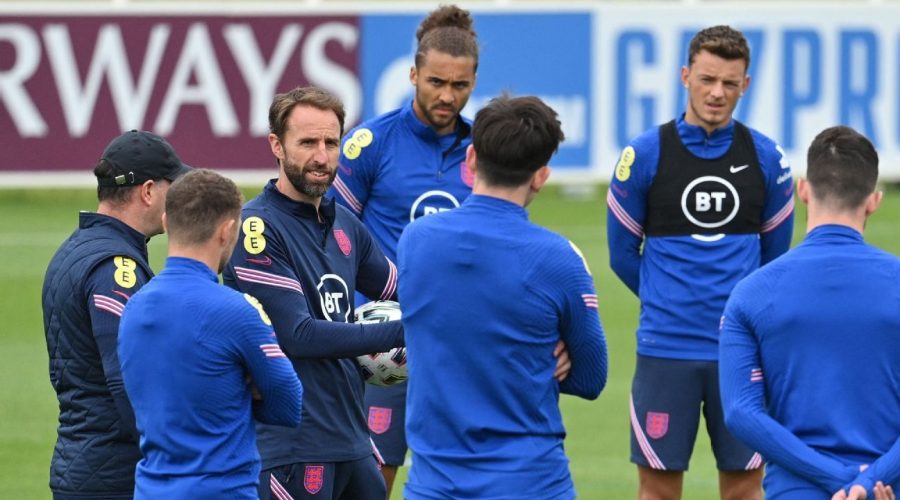 Contained within a video montage shown to the England squad on their first day at St George’s Park this summer was the moment that defined manager Gareth Southgate’s playing career. His decisive penalty miss against Germany in the semifinals of Euro ’96 gave the centre-back an unwanted place in the catalogue of disappointment that has stretched back 55 years since England won their only major international trophy, the 1966 World Cup.

Southgate has meticulously attempted to redefine the national team’s relationship with its past, deconstructing his personal experience by underlining why penalty shootouts are something to be prepared for rather than pathologically feared.

But one of Southgate’s biggest challenges during his time in charge has been to instigate a mental shift from the burden of the weight of history to creating their own in a high-pressure environment.

Southgate took over from Sam Allardyce (who was in charge for one game) after Roy Hodgson’s England were knocked out of Euro 2016 by minnows Iceland at the round-of-16 stage, with Tuesday marking a five-year journey to the same point. The occasion takes place against a backdrop of countrywide Euro ’96 nostalgia, which has taken on greater prominence since it was confirmed Germany would be England’s opponents (noon ET; stream LIVE on ESPN/ESPN+).

In many ways, contests against Germany down the years encapsulate the eternal struggle in the English sporting consciousness, with the joy and lasting hope created by winning the 1966 final balanced against tournament exits in 1970, 1990, 1996 and 2010.

Germany certainly revelled in the moment 25 years ago, appropriating England’s “Three Lions” anthem by singing “Football’s coming home” on the balcony of Frankfurt’s Civic Centre when celebrating with the trophy. The song reached No. 16 in the German charts that summer and could be heard ringing out in Berlin as recently as 2014, when around half a million fans celebrated as Germany paraded the World Cup.

However, the general perception is that Germany view this sporting rivalry differently. England’s lack of pedigree in the latter stages of tournaments — they have won just one knockout match in the Euros, compared with Germany’s 11 — means the four-time world champions winners place greater importance on those in closer proximity, such as Netherlands, France and Italy.

And while the English public has spent the week stirring up images of Southgate’s miss, Sir Geoff Hurst’s 1966 hat trick and Frank Lampard’s “ghost goal” of 2010, the squad have appeared somewhat bemused by the entire conversation.

Southgate has placed great stock in reconnecting with the fan base after acrimony created by past underachievement, but this is one instance where he will be more than happy that his players are seemingly able to emotionally disengage from the noise around them.

Dominic Calvert-Lewin put it bluntly, when asked by a reporter approaching 50 years old, how he perceived the dynamics of England vs. Germany. “It’s not as personal as perhaps someone of your age,” said the Everton striker with a smile. He isn’t wrong: Eleven players in England’s 26-man squad were not alive during Euro ’96.

Many of this group have cited memories of Lampard’s strike in 2010, though. England were 2-1 down in their round-of-16 match in South Africa when the Chelsea midfielder’s shot hit the crossbar and bounced down over the line, only for the officials to wave play on. With FIFA resisting the implementation of goal-line technology, England were left with a sense of injustice as the match slipped away, eventually losing 4-1.

For today’s England players, it was merely an isolated incident, rather than the latest entry in a long-running German grievance, but Southgate & Co. can learn from their worst performance at Euro 2020, which was against another team where the intensity of the rivalry was supposedly confined to the stands.

Scotland came to Wembley and deserved a 0-0 draw, with England seemingly inhibited by their tactics or the event itself. Since then, Southgate has publicly claimed that the “unique occasion” may have been a factor; if so, there is an element of uncertainty how the second-youngest squad at these finals will handle a similar environment of booing anthems and disparaging songs.

Yet hostility from the assembled 45,000 — twice the number present against Scotland — will be weighted heavily in England’s favour and it is undeniably an advantage to play in their home stadium for the fourth consecutive game, one that some in Germany believe has been exacerbated by UEFA’s decision not to allow Joachim Low’s side to train at Wembley before the game.

The governing body insists this is down to the amount of rain expected in London in the 36 hours before kickoff, but it counts as another small win given England have two exact replicas of the playing surface at St George’s Park.

Conditions look inviting for England, then, down to the chaotic feel of Germany’s qualification from undoubtedly the toughest group: losing to France, hammering Portugal and scraping a draw against Hungary. The structure Southgate has instilled in England looks serene by comparison, even if it has come at the expense of some attacking intent.

It should therefore come down to a question of whether England can truly inhabit the moment. Germany have a habit of peaking when the serious stuff starts; England, categorically, do not.

The FA has sought to address in recent years by arranging high-profile friendlies. Since Southgate took charge in October 2016, England have played exhibition games against Spain, Germany (twice), France, Brazil and Netherlands, with one won (1-0 vs. Netherlands in March 2018.)

There was further progress in the inaugural UEFA Nations League, defeating Spain away from home and beating Croatia at Wembley, with the ultimate aim being that England acclimatise themselves to the toughest challenges so the gap does not feel as big when tournament football comes around.

Marcus Rashford, who scored in that Nations League victory in Spain, believes the approach has reaped dividends and was perhaps a key factor in England reaching the 2018 World Cup semifinals.

“I think it has helped massively,” the Manchester United striker told ESPN. “I remember a few years ago, we were performing well but we weren’t getting results against the big teams.

“It was something that we had to concentrate on and try and change. In recent times, we’ve got that a bit more, we’ve got better results and played better against them. It is the fact that we’ve been exposed to these games which is probably why we feel calmer going into this game and ready for the game. Germany are obviously a top team with top players but we are not going to let that hold us back in any way. We are just going to go and try to win the game; try and be positive.”

Both sides have key decisions to make. Low is facing calls to replace Ilkay Gundogan with Leon Goretzka in midfield after his match-saving contribution against Hungary, while Leroy Sane’s place on the wing is under threat from Thomas Muller as he continues to recover from a knee injury.

Germany are likely to retain their 3-4-2-1 shape, posing the conundrum for Southgate whether he switches from 4-2-3-1 and matches up with something similar — as England did in many of those preparatory friendlies — to give greater control in midfield.

Phil Foden is pushing for a recall alongside Harry Kane and Raheem Sterling, but forwards Jack Grealish and Bukayo Saka performed well against Czech Republic, as did centre-back Harry Maguire on his return to the team following an ankle injury.

Whatever he plumps for, Southgate says he gives his players the same message before every game.

Writing on The Players’ Tribune, Southgate said: “The reason that I repeat it is because I really believe it with all my heart. I tell them that when you go out there, in this shirt, you have the opportunity to produce moments that people will remember forever. You are a part of an experience that lasts in the collective consciousness of our country.”

He knows that better than most.

July 3, 2021 Soccer Comments Off on Forget the past: England want to make history against Germany
NFL News