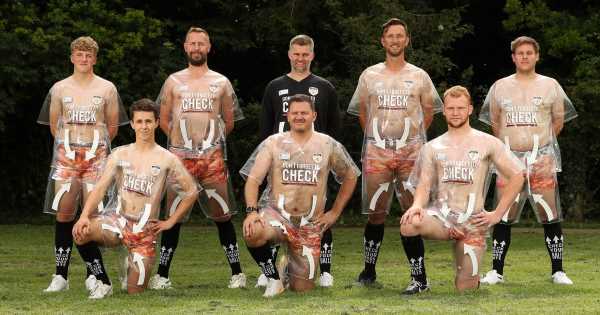 A football club famed for their novelty kits has come out with the world's first "see-through" strip in a bid to get us talking about balls.

Bedale AFC's new kit has been created to try and help raise funds for Prostate Cancer UK, a charity that does fantastic work combating cancer up and down the country.

The kit's shirt is entirely see-through, with large white arrows pointed towards each player's manhood, alongside text that says "Don't forget to check."

It's hoped that the kit will also help raise awareness of various forms of cancer, which can be caught earlier by regular self-examination.

Thus far, the Yorkshire-based club have raised £200,000 for Prostate Cancer UK, with their overall objective being £250,000.

Bedale currently play in the North Riding League, and are pledging to donate £5 for every kit sold.

Previously, the eccentric club have created kits inspired by hotdogs, as well as bangers and mash and cheese graters – to the bemusement of their Riding League opponents.

Club chairman Martyn Coombs said: “Not only is this the worlds first see through kit, the hard hitting message to CHECK is to really get men talking together and going to literally get checked out.

“We got such a huge response to the kit and were inundated with requests to buy them, so we decided to produce extra shirts to cope with demand and, with £5 from the sale of every shirt donated to charity, we now raise thousands of pounds every year.

“This year we’re supporting a testicular cancer charity too.”

Bedale FC is sponsored by sausage maker HECK, whose co-founder, Andrew Keeble said: “What started as an innocuous sausage kit a few years ago has snowballed into this massive, almost unstoppable force that shows no sign of letting up.

“Every time we think that’s it, we get another idea for a new kit and away we go again.

“My father approached his GP after experiencing difficulties but, by then, it was too late. Prostate cancer is absolutely something we can do something about.

“Men are often too embarrassed, too shy, or too ruddy stubborn, to get it checked out.”