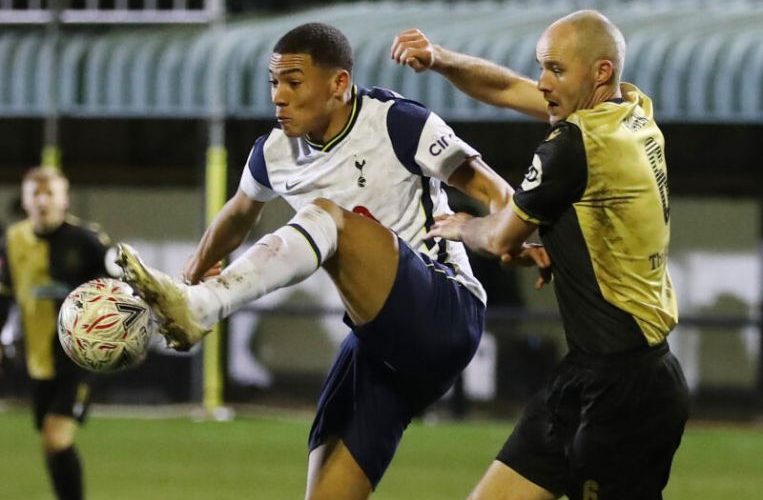 CROSBY (AFP) – Tottenham ensured they did not fall foul to the biggest FA Cup shock in history as Carlos Vinicius scored a first-half hat-trick in a 5-0 demolition of eighth-tier Marine on Sunday (Jan 10).

The 168 league places between the sides is the biggest gap between opponents the 150 years of the FA Cup and the gulf in class showed as Spurs’ fringe players took their chance to shine.

Far from the luxury of the £1 billion (S$1.8 billion) Tottenham Hotspur Stadium, Jose Mourinho’s men had to get changed in a function room due to social-distancing guidelines.

No fans were allowed into the due to coronavirus restrictions, but plenty watched on from gardens in the houses backing onto the 3,185-capacity Rossett Park.

Marine did not miss out on their big pay day as 23,000 fans bought virtual tickets to support a side whose season has been curtailed due to the pandemic.

The home side missed out on facing England captain Harry Kane as he did not travel, while Mourinho left Son Heung-min and Gareth Bale on the bench.

Spurs still fielded a strong side featuring Dele Alli, Toby Alderweireld and Lucas Moura, while Kane’s replacement Vinicius made his case for more game time in a busy few months ahead with Tottenham still involved in four competitions.

Marine were inches away from a stunning lead when Neil Kengni’s long-range strike caught Joe Hart out and came off the bar.

The on-loan Benfica striker then completed a 37-minute hat-trick with the goal of the game as his subtle lob dropped into the far corner.

Mourinho introduced 16-year-old Alfie Devine at half-time and Tottenham’s youngest ever player had a debut to remember as he fired in at the near post to make it 5-0.

Bale was then brought on for the final 25 minutes to aid his return to match fitness, but the four-time Champions League winner could not add to the scoreline as Spurs cruised into the fourth round.