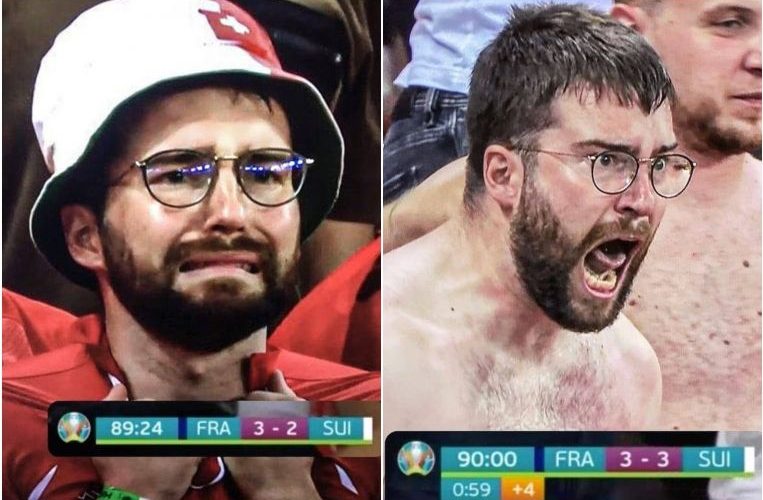 GENEVA (AFP) – Topless and fully clothed, desperate and ecstatic: a Swiss football supporter has become a viral sensation after cameras zoomed in on his roller-coaster emotions watching his team beat France in Euro 2020.

Found by Swiss media after images of him yelling and grimacing during Monday’s (June 27) match went round the world, Luca Loutenbach has already amended his Twitter account to describe himself as the “Nati’s official meme since 28.06.2021.” The Nati is the nickname for Switzerland’s national football team.

The game between the Swiss underdogs and the French World Cup winners was intense, with the Swiss leading 1-0 before the French scored three goals in quick succession.

It looked all over for Switzerland but the Nati scored two late goals, forcing extra time before victory in the penalty shoot-out to huge jubilation from their fans.

Loutenbach, 28, told Switzerland’s Blick TV that he was “just a normal fan”.

But those filming the game thought otherwise, zooming in on him several times during the play as he perfectly encapsulated Swiss fans’ ecstasy, dejection and frenzied joy – starting off wearing the Swiss red shirt and ending up topless and screaming.

The images quickly went viral, with London Mayor Sadiq Khan tweeting one with the comment “man of the match”.

“Thanks for all your messages, what is happening to me is unreal,” he wrote Wednesday on Twitter.

“I’m actually quite discreet, even if that wasn’t on show during the game. So this is fun for one or two days, but I hope it will ease off a bit after a while,” he told Swiss TV.

Such is his fame that Switzerland’s airline Swiss has gifted him a free ticket to Russia to see his team play Spain in the quarter-finals on Friday in St Petersburg.

The country’s tourism agency has also contacted him via Twitter to offer a relaxing weekend away in Switzerland.

And he posted jokingly: “While I had promised myself never to go on social media … Here I am against my will!”