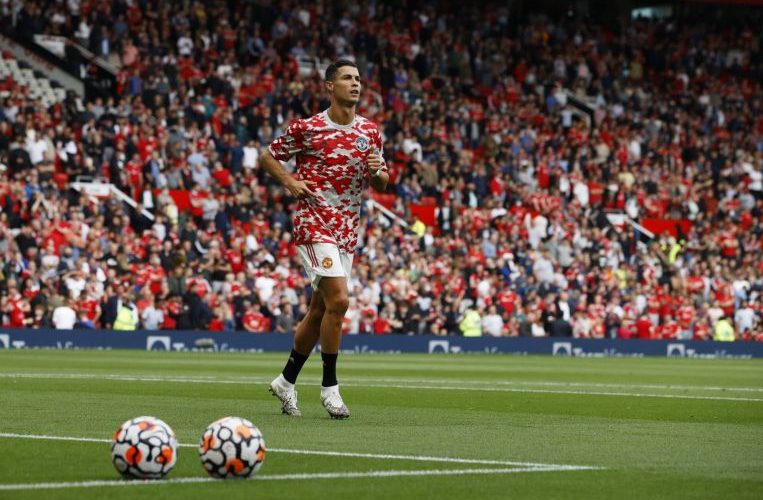 LONDON (AFP) – Cristiano Ronaldo received a hero’s welcome at Old Trafford on Saturday (Sept 11), walking out of the tunnel to rapturous applause during his second debut for Manchester United.

United fans, who were all eagerly waiting to see the Portuguese forward back in action for their club again, were also cheering for their star during the team warm-up ahead of their Premier League match against Newcastle. Most of the fans were on their feet, taking photos, some waving the Portugal flag in what was an electrifying atmosphere at United’s home ground.

Reciprocating, Ronaldo applauded the fans as they shouted his name and belted out the famous “Viva Ronaldo” chant.

Also among the crowd were the club’s American owners, the Glazers, club legend Ryan Giggs and former manager Alex Ferguson.

When it was time for kick-off, the “Viva Ronaldo” chant grew even louder, and fans were twirling their red and white scarves over their heads, while the BBC called it “a real party atmosphere”.

Former United midfielder Owen Hargreaves, who was at Old Trafford as a pundit, commented during a pre-match interview that there were “more than usual” fans outside the stadium waiting for the arrival of the team bus.

When the coach finally arrived and Ronaldo alighted, loud cheers could be heard from supporters, most of whom were donning Ronaldo jerseys, as he walked through the gates into the stadium.

“I have never seen so many smiles at Old Trafford for a very long time,” added Hargreaves.

Five-time Ballon d’Or winner Ronaldo, who left United to join Real Madrid in 2009, returned to the club in a surprise transfer from Juventus just before the transfer deadline.

United manager Ole Gunnar Solskjaer on Friday said the 36-year-old forward would feature “at some point” in the match but decided to start the Portuguese right from the kick-off.

Since joining United, Ronaldo broke the all-time international goal-scoring record with his 110th goal for Portugal in a World Cup qualifier win against the Republic of Ireland.

Having been suspended for the subsequent game against Azerbaijan for removing his shirt in celebration, he jetted to England and has been training with his new teammates for the past few days.

“He’s been having a good pre-season with Juventus, he’s played for the national team, he’s had a good week with us here,” Solskjaer said.

Ronaldo won three Premier League titles and the Champions League during six trophy-laden years with United, before going on to shine with Real and Juventus.

It seemed United would miss out on a reunion with their former star when Manchester City moved to sign him.

But Ronaldo has said his relationship with Ferguson played a key role in convincing him to return to Old Trafford, calling the move “a dream come true”.

Solskjaer, who played with Ronaldo during his first spell at the club, said: “Of course we’ve followed his career from afar since he left here and I think everyone’s very happy to have him back.

“He can speak for himself but he seems like he’s happy to be back as well.”

United will be expected to challenge champions Manchester City for the title after such a productive transfer window.

Solskjaer believes Ronaldo will add a higher level of quality to the squad, both physically and mentally, as they try to land a first trophy of the Norwegian’s reign.

“We have grown as a group the last few years. The determination, the desire, the focus has improved over time and bit by bit,” he said.

“Even like bringing Raphael in, he’s come in with a winner’s mentality, an unbelievable focus. Then of course Cristiano comes in as well and there’s no place to hide when you’ve got winners like them. You can’t go into training and give 95 per cent or not being focused.”

September 11, 2021 Soccer Comments Off on Football: Rapture at Old Trafford as Ronaldo kicks off his second coming
NFL News