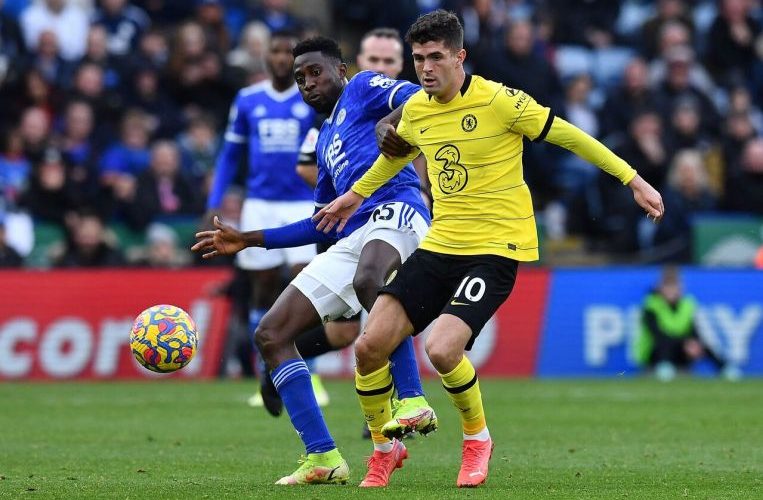 LEICESTER, ENGLAND (REUTERS, AFP) – American forward Christian Pulisic was back among the goals as Premier League leaders Chelsea extended their advantage at the top of the table to six points with a comfortable 3-0 win at Leicester City on Saturday (Nov 20).

The visitors raced into a two-goal lead inside 28 minutes after Antonio Rudiger climbed highest from a corner to head home and N’Golo Kante arrowed in a rare goal.

Leicester improved after the break, but Chelsea remained in control and put the game to bed when Pulisic, who has endured a frustrating, injury-interrupted season, stepped off the bench and scored in the 71st minute.

The victory, Chelsea’s fifth from six away league games this season, moved the Blues onto 29 points, six clear of second-placed champions Manchester City, who play West Ham United on Sunday.

Thomas Tuchel’s side are unbeaten in their last nine games in all competitions after erasing the bitter taste of a frustrating 1-1 draw against lowly Burnley before the international break.

“It’s a good away game, an excellent result. We created a lot of chances,” the German manager said.

“We knew we needed to be strong from first to last minute. This is what we did.

“N’Golo is outstanding. He finds another gear on the pitch, when he plays with a free mind he can be the difference.”

Leicester, who have for so long been top-four challengers in the Premier League, are well off the pace in 12th after their fifth loss of the season.

Foxes boss Brendan Rodgers switched to a three-man central defence in a bid to shore up his leaky rearguard, but the Blues easily found holes in the formation.

Chelsea started brightly, with former Leicester full back Ben Chilwell denied by the crossbar early on.

The goal that gave the visitors the lead was always likely to come via one route though: Coming into the match, no side had scored Premier League goals with headers this season than Chelsea, and no team has conceded more via headers than Leicester. Sure enough, some slack Leicester marking allowed Rudiger in to head home.

It was a well-timed reminder of the German’s quality as Chelsea try to persuade the 28-year-old to sign an extension to a contract that runs out at the end of the season.

“Everybody wants him to stay. It’s pretty clear,” Tuchel said.

“Sometimes there’s a delay in these things, but he knows which club he plays for – a fantastic club in a fantastic league.

“We need a bit of patience and hopefully there will be a happy ending.”

It was all too easy for Chelsea thereafter, with Leicester, who beat the Blues in their previous two meetings – last season’s FA Cup final and a Premier League victory at the King Power in January – offering no response.

With Leicester also allowing far too much space ahead of them, Kante took advantage to make it two, given time to carry the ball to the edge of the home penalty area before firing in.

It took the hosts until the 58th minute to create a shot on or off target, with substitute James Maddison shooting straight at Chelsea goalkeeper Edouard Mendy, before Daniel Amartey did actually force Mendy into a fine stop.

Chelsea’s strength in depth was clear for all to see as two substitutes combined to put the game to bed, as Hakim Ziyech fed Pulisic, who scored his first Blues goal since August at the near post.

It could have been more, with Chelsea having three goals ruled out for offside, and would not have been undeserved, given their dominance at the King Power Stadium.