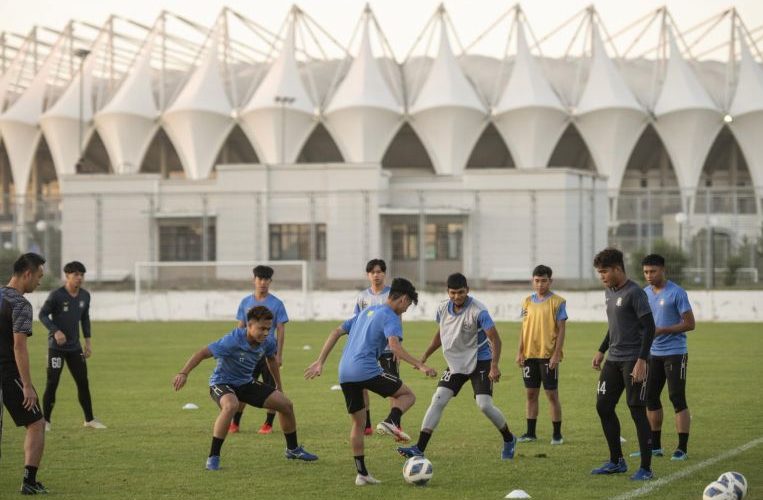 SINGAPORE – Tampines Rovers’ first steps into their maiden Asian Champions League (ACL) campaign have not brought much joy after two defeats in as many games in Tashkent.

But the Stags are hoping that the experience will serve their young charges well in the future.

The Singaporean side’s 19-year-old forward Marc Tan has impressed after earning starts in both matches – which finished in 2-0 and 1-0 losses to Gamba Osaka and Chiangrai United respectively.

Speaking to The Straits Times ahead of Tampines’ clash with South Korean champions Jeonbuk Motors at the Lokomotiv Stadium on Thursday (July 1), Tan admitted his time in Uzbekistan has been a chastening experience.

He said: “The last two opponents have easily been the best I have ever faced. They are top notch both physically and in terms of their technique. It’s been a huge step up in terms of what I have been used to.

“The speed of the game is super quick. Back home, you have time to breathe and think but in the ACL, you don’t get that at all, and I feel like I’ve never run so much.”

Still, he values the opportunity to play in Asia’s top club competition. The only son of former Malaysia Cup star Steven Tan said that his father was eager to remind him that despite his own achievements, he had never been able to play in the ACL.

And if his dad’s words were not enough, the final-year Temasek Polytechnic student quipped that playing against players he has used on the Fifa video game is special enough.

Tan singled out Osaka’s Japanese internationals Gen Shoji and Takashi Usami as players he has used in the game. Against Jeonbuk, he will face another, in winger Modou Barrow, who previously turned out for Swansea City in the English Premier League, South Korean veteran defender Lee Yong and former Barcelona youth player Paik Seung-ho.

Said Tan: “I do realise that this is really a special opportunity and I am grateful to be given good playing time. It’s never a good feeling to lose matches but I do believe that we will all use this as a great learning experience. Personally, it’s such a big confidence boost and I expect and demand a lot more from myself going forward.

“I recognise that this is the standard that I should aspire to reach and play at. Given that I discussed with my dad and made the move to Tampines from Young Lions to get playing time, I couldn’t ask for more in terms of my development.”

Tampines head coach Gavin Lee is eager to see how his young charges apply what they have learnt when they eventually return to the Singapore Premier League.

Said Lee: “Giving young players an opportunity here is one of the things we wanted to check off the list and I’ve been pleased with them. Marc and the rest have worked hard for the chance and I am excited to see how they transfer what they have learnt to the SPL.

“The biggest challenge for Marc is to ensure that he maintains this hunger and desire to keep learning.”

Tan and the rest of his teammates could be in for their toughest lesson yet. Jeonbuk, who have four points from two matches, are second in Group H, behind Osaka only on goal difference. The South Koreans have won the ACL twice, in 2006 and 2016.

While noting that Stags have played well in their losses, Lee wants the performances to be translated into points.

“Largely, we can be very proud of our performances in the competition so far but the results can be better,” he said. “But given what we have, I think we have done well. Jeonbuk are at a different level compared to us but we will definitely always be a team that goes into any match with all intentions to perform and win.”

Tampines will close out their campaign by facing their group opponents again on July 4 (Jeonbuk), July 7 (Osaka) and July 10 (Chiangrai).

June 30, 2021 Soccer Comments Off on Football: No wins but tough ACL journey set to benefit Tampines' young ones
NFL News