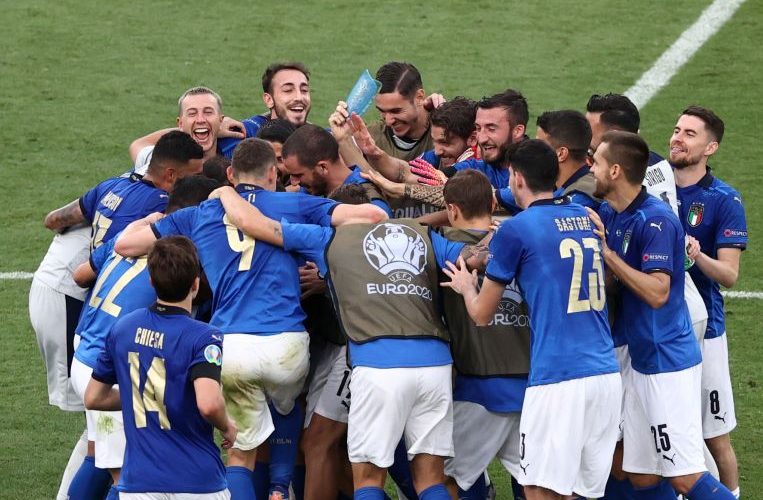 PARIS (AFP) – Italy could break an 82-year national record when they take on Austria in the last 16 at Euro 2020 on Saturday (June 26), while Wales must find a way to stop neutrals’ favourites Denmark.

Roberto Mancini, who took over after Italy’s failure to qualify for the 2018 World Cup, has rebuilt the Azzurri into contenders, overseeing a 30-match unbeaten run to equal the mark set under two-time World Cup-winning coach Vittorio Pozzo in the 1930s.

Italy breezed through the group stage and have won their last 11 matches without conceding a goal. They will be heavy favourites against an Austria side through to the knockout stages of the tournament for the first time.

“Playing at Wembley really should be a pleasure because… well, sometimes players never get a chance to play there in their lives,” said former Manchester City boss Mancini.

“It’s such a spectacular stadium and I want us to go out there and play well because, well the stadium kind of deserves that.”

Austria advanced as runners-up from Group C, recovering from a 2-0 loss to Netherlands by beating Ukraine 1-0 in their final game.

“We know we’re the underdogs and it’s difficult to judge our realistic chances but even with 10 percent you can achieve a lot,” said Austria coach Franco Foda.

“This team has already achieved something spectacular but now we’re focused on taking the next step to make it to Munich.”

Gareth Bale and Wales play Denmark in Amsterdam, dreaming of a repeat of their run to the Euro 2016 semi-finals after advancing as runners-up of Group A behind Italy.

Denmark overcame the shock and trauma of Christian Eriksen’s cardiac arrest during their opening game against Finland to qualify for the knockout phase as the second-placed team in Group B despite losing their first two matches.

After being revived on the pitch in Copenhagen, Eriksen spent six days in hospital after his collapse, undergoing surgery to have a defibrillator implanted.

“We dealt with a very traumatic experience and the same night we kept playing. We played one of the best teams in the world (Belgium) a couple of days later and we beat Russia playing very intensely,” said coach Kasper Hjulmand.

“It shows the power we possess, both physical and mental.”

The Danes are aiming to win a knockout tie at the European Championship for the first time since they stunned the continent to win the trophy itself in 1992.

It is exactly 29 years since Denmark defeated Germany in the final in Gothenburg having famously only qualified because war-torn Yugoslavia disintegrated.

Wales will be denied a proper travelling support in Amsterdam with fans barred from entering the Netherlands from the United Kingdom.

Welsh media reports have picked up on fans making it to Amsterdam having come from watching the team play in Azerbaijan in the group stage – without returning to Britain – only to be turned away at Schiphol airport.

The travel ban does not apply to supporters coming from Denmark, which like the Netherlands is in the European Union.

“We’ve been in situations where teams are favourites or have more support, against Turkey (in Baku) they had 18,000 in the stadium so it makes no difference. When it comes to kick-off it is just us players on the pitch,” said Bale.