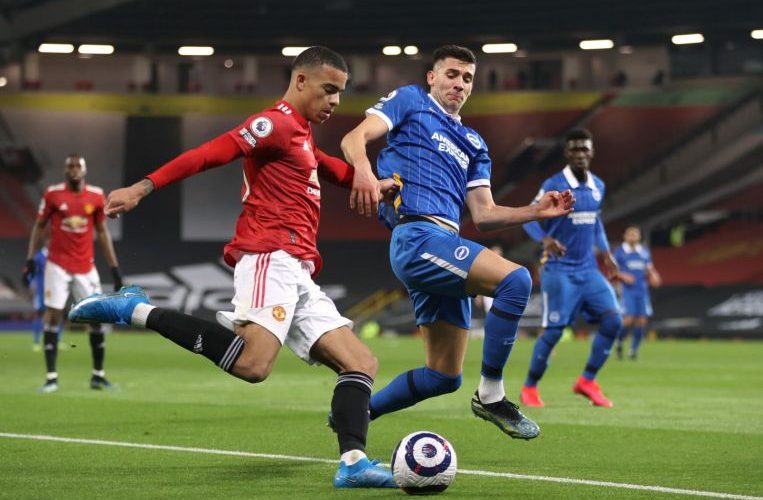 Former United striker Danny Welbeck had headed Brighton into a 13th-minute lead before Marcus Rashford equalised in the 62nd minute and Greenwood popped up on the edge of the six-yard box to complete the Old Trafford side’s comeback in the 83rd.

The result left second-placed United on 60 points from 30 games, 14 behind leaders Manchester City who have played a game more and four ahead of third-placed Leicester City.

United manager Ole Gunnar Solskjaer was pleased with his side’s hard-fought win and said David De Gea and England’s Dean Henderson, picked ahead of the Spaniard, were now neck-and-neck in the pecking order for first-choice goalkeeper.

“It’s always difficult to play Brighton,” Solskjaer told the BBC. “We have had good results and we’ve had to earn them the hard way. We managed to find a way in the second half.

“We had to come in at halftime and compose ourselves as we didn’t create much after they scored.”

“I’ve got two great keepers, two numbers ones. David de Gea spent a while back home and then he had internationals so he hadn’t played for about a month. He’ll definitely play football for us again.”

Welbeck fired Brighton ahead with a composed finish after Henderson saved his initial header with United’s static defence giving him time and space to pick his spot after Neal Maupay swung in a cross from the right.

Lewis Dunk shaved the crossbar for Brighton with a 19th-minute header and Jakub Moder also came close for the visitors on the stroke of halftime before United moved up a gear in the second half.

Rashford levelled when he took a Bruno Fernandes pass in his stride and beat goalkeeper Robert Sanchez with a clinical side-footed finish into the far corner from inside the penalty area.

Maupay’s shot flashed across the face of goal in the 72nd before Greenwood got on the end of a speculative Paul Pogba volley in the 83rd to find the net and turn the tide as Dunk was unable to clear his header off the line.

“I’m confident in terms of the team, the way we’re playing and the personality in the team but until you get the points you can never relax,” he said.

“We took the lead and were probably the team which carried the most threat in the first half. We just missed that final pass. Man United responded in the second half without creating too many chances. They scored from not too much.”