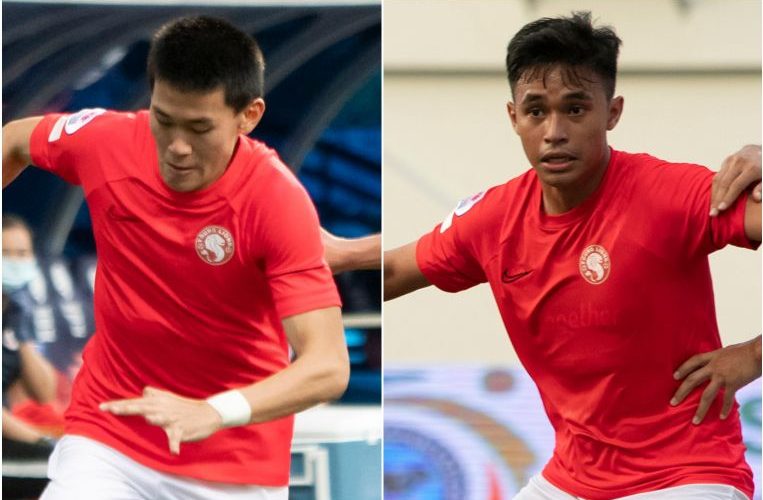 SINGAPORE-When the Young Lions take to the newly-laid artificial pitch at the Jalan Besar Stadium on Wednesday (March 17) against Albirex Niigata (S), two players will be reunited with their former colleagues.

But don’t expect the encounter to be too friendly, because Daniel Goh, 21 and Zamani Zamri, 19 who both spent a season with Albirex in 2020 and 2019 respectively, are eager for an upset against the reigning champions.

Speaking to The Straits Times a day before their Singapore Premier League (SPL) match against the Japanese side, Goh and Zamri both credit Albirex for playing a crucial role in their development.

Said Goh: “They are an extremely disciplined team on and off the pitch. The players there would report for training almost two hours before it starts and that really allowed me to see what it takes to be a champion in a professional league. I learnt a lot when I was there.”

Zamri, who notched an assist in Young Lions’s 3-3 draw in last Sunday’s opening match against Balestier Khalsa, added : “On the pitch, I learnt to work as hard as you can for yourself and for your teammates. I think my hunger and desire to be a professional footballer grew while I was there.

“Even the whole culture shock I had when I first went there allowed me to build a stronger mindset.”

The Young Lions will be led by Philippe Aw, who replaced Nazri Nasir for this season as the 50-year-old is continuing his rehabilitation after a medical procedure late last year.

While they have only played one game, local football observers are already expecting the Young Lions to claim a few scalps this season. Against the Tigers, the team were brave in possession and displayed a quick attacking philosophy.

But Aw is not too bothered about causing upsets, focusing on performances instead. Albirex have won the last 14 matches between both sides, with the Young Lions’ last win (1-0) coming in 2015.

Despite the strength of Albirex, who won 3-1 against Hougang in their opening game, Aw expects his boys to approach the game as they would any other match.

He said: “I know the opponents are better but it’s a good test for the boys, to go up against a good opponent and still try and play the kind of football we want to.”

Albirex head coach Keiji Shigetomi predicted an exciting match for the fans, noting that the “Young Lions are young, fast and fit”.

Said the 41-year-old: “Young Lions have many players this year who have at least one year of SPL experience. They have good attacking players such as Ilhan (Fandi), Hami (Syahin), Khairin (Nadim), Joel (Chew), and also Zamani and Daniel Goh, both played for us last year. So our midfield and defence have to defend properly.”

In Wednesday’s other games, Balestier Khalsa host Tampines Rovers, while Tanjong Pagar United face a stern test in the form of the Lion City Sailors and Hougang United will take on Geylang International.