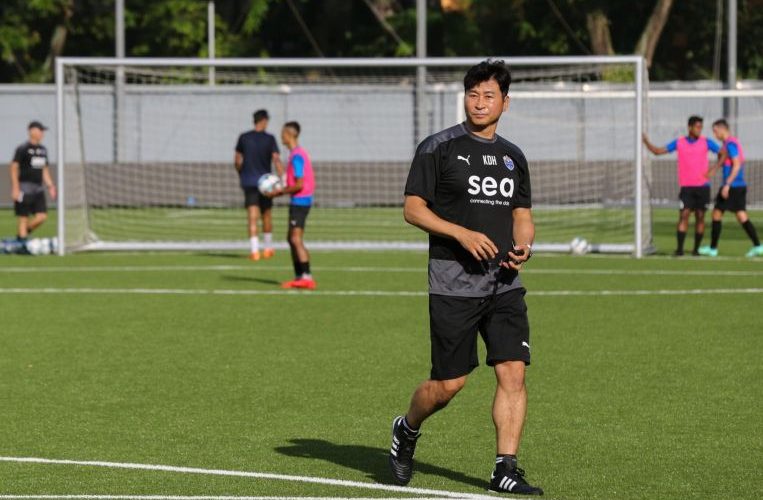 SINGAPORE – Lion City Sailors coach Kim Do-hoon and his team’s newest signing Hariss Harun have barely settled into life at their new club but are set for a baptism of fire on Friday (July 23) at the Jurong East Stadium.

The Sailors face their biggest championship rivals and current Singapore Premier League (SPL) leaders Albirex Niigata with both sides knowing a victory will shift the title momentum in their favour.

The SPL resumed last week after two months and the international break. Defending champions Albirex are top on 27 points, one more than the Sailors, with 10 games of the season remaining.

Kim was appointed on a two-and-a-half year contract in May, replacing Australian Aurelio Vidmar. The South Korean, who led Ulsan Hyundai to victory in the AFC Champions League last year, arrived in Singapore last month and served a two-week quarantine before taking his first training session in the last week of June.

Kim, who celebrated his 51st birthday earlier this week, said via an interpreter: “Yes, this game is important but so is every game because right now we are known as just challengers for the title.

“It is important that in these (10) matches, we can show that we deserve to be title winners. What I’m looking forward to the most is to watch my players perform.”

Singapore national team captain Hariss is keen to impress his new employers. The midfielder, who spent seven trophy-laden seasons with Malaysian giants Johor Darul Takzim, joined the Sailors on a 3 ½-year deal in May as well.

The 30-year-old, who has yet to win domestic silverware in local football, should start against the White Swans and acknowledged the tough task awaiting his team.

The Japanese club, league champions four times in the past five years, are the only unbeaten team in the SPL this term. The Sailors have also failed to win in their last three encounters against Albirex.

“This game really is very important,” said Hariss. “There aren’t many games left so at this stage, every single game and every single point counts.

“From training this week, you can see that the players are raring to go and looking forward to this challenge (of beating Albirex).

“They have been the one that all the local teams have tried to beat and they’ve been a tough nut to crack so far, so it’s not going to be easy but we aim to be the better team at the end of the 90 minutes.”

Albirex head coach Keiji Shigetomi knows the upcoming match could push his players to their limits but is looking forward to a personal duel in the dugout.

He said: “Hariss and coach Kim’s addition will no doubt strengthen them. There are also many national and star players in their team. So we have to be ready and focus all our energy on this match.

“The team has been training hard for the last two months and we are looking forward to just be in competitive action again.

“And personally, it is an honour and pleasure for me to meet and go against the current Asian Champions League champion in coach Kim.”

While the Sailors are unbeaten in their last eight matches and are on a six-game winning run, Kim noted that he has seen improvements in the team over the last few weeks.

“Compared to the first time when I watched videos of the team and now, I would say that a lot has changed,” he said. “I have seen development in the players each week. Everyone is working for one another and that is how it should be at the Sailors.”

Several of his first team players Shahdan Sulaiman, Saifullah Akbar and Song Ui-young will miss the match through suspensions but the Sailors have a host of other attacking options like Brazilian Diego Lopes and forwards Gabriel Quak, Faris Ramli and Stipe Plazibat.

Clutching his head to mimic a headache, Kim said : “You should know from that reaction how hard it is (to pick a starting XI).”

He added: “When I first came in, I spoke to the owner and spoke a lot about looking to the future and how we can make an impact here (for the long term).

“In just a few weeks, I think we have made a lot of improvements. It’s vital we show that against Albirex.”