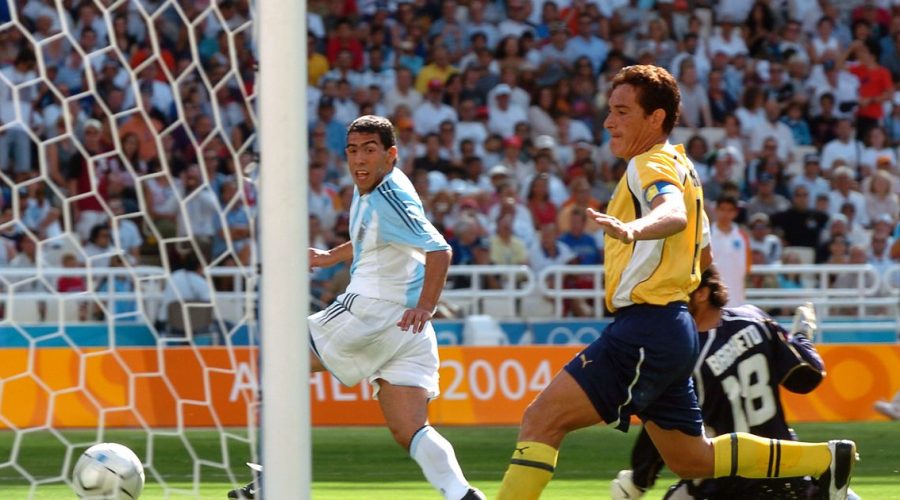 It is a cliché that never stops in Argentina.

But for Carlos Tevez, the tag was based on some serious merit and moments of genius.

And while he didn't hit the heights of El Diego, a career at Manchester United, Manchester City and Juventus makes him one of the nation's best forwards in recent times.

The West Ham hero burst onto the international scene with an inspired Olympics at Athens in 2004, where he secured the South Americans Gold.

Aged just 20, he finished as the Games' top scorer with eight goals, including the winner against Paraguay in the final.

That goal came after a brilliantly timed run into the box, positioning himself in between the defender and keeper to slot the ball home after a cross.

Before then, he starred in a 3-0 win over Italy, opening the scoring with an acrobatic volley inside the box.

It's clear in the footage to see where the comparison came from.

He was a number 10, just like Maradona, and had a low-centre of gravity that allowed him to feint and dribble past opponents with ease.

Like Maradona, Tevez burst into the football world following a childhood of poverty.

Tevez began life at Boca Juniors, where Maradona was idolised towards the beginning and end of his remarkable career.

He moved to Brazilian club Corinthians, and starred for Argentina at the 2006 World Cup in Germany.

That summer, he turned the footballing world on its head by announcing that he was joining West Ham with fellow Argentina teammate Javier Mascherano.

But the Hammers struggled and so did he, not scoring in six months of football as the team spiralled towards relegation.

Then Tevez single-handedly kept them up with seven goals in 10 games, starting with a free-kick in a defeat against Tottenham, running into the crowd at Upton Park after breaking his drought.

He endeared himself to West Ham supporters with a combination of never-say-die work-rate and a skill level far higher than what the fans were used to seeing in east London.

Tevez always received a warm welcome on his returns, and fans continued to sing his name even when he wasn't wearing the colours of claret and blue.

Similar goalscoring exploits made him a hit at United, City and Juventus – winning Premier League titles and a Champions League along the way.

But as this footage from 2004 and the career that followed it shows, Tevez can hang up his boots knowing he earned the right to be called the "new Maradona".

July 26, 2021 Soccer Comments Off on Footage of Tevez at Athens Olympics shows why he was ‘new Maradona’ aged 20
NFL News