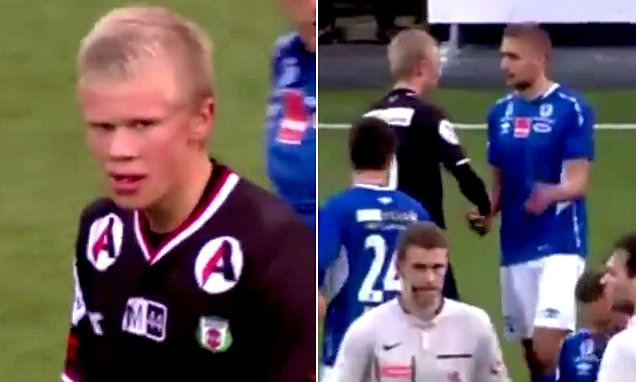 Destined for greatness! Sensational footage from Erling Haaland’s debut for Bryne in the Norwegian second tier – when he was just 15 – proves the striker was set for stardom, after he sealed a £51m move to Man City

Manchester City were quick to pounce to snap up Erling Haaland from Borussia Dortmund in a £51million deal this week – and a sensational video filmed during his early days in Norway as a teenager reveals he was always set for stardom.

Haaland has not always been the global name he is today. He made his debut for Bryne in the Norwegian second tier aged just 15 in 2016, playing the full 90 minutes as his team lost to KFUM-Kameratene Oslo in front of a meagre crowd of 1,649.

The small town is where his father, Alf-Inge Haaland, began his career, and the family returned there after he left Manchester City in 2003. His son quickly entered the world of football, and began to be trained up by coach Alf Ingve Berntsen. 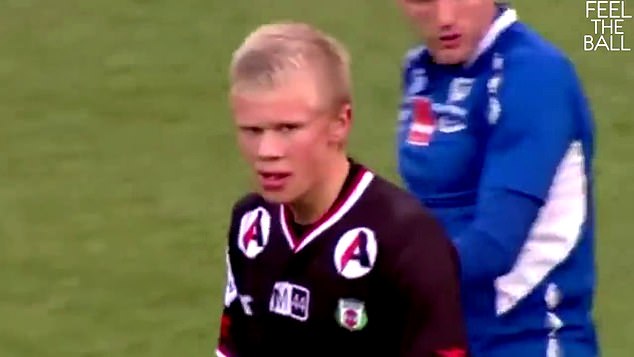 Despite his age, Haaland is said to have stood out head and shoulders above the rest at both regional and national level, and was rewarded with his maiden senior game.

In a clip of his highlights from the debut, the frontman’s physical presence as well as his quick thinking when dropping into dangerous areas around the box were evident.

One particular moment sees him played away down the right, where he took on his full back, beat them near the byline and smashed in a dangerous-looking delivery. 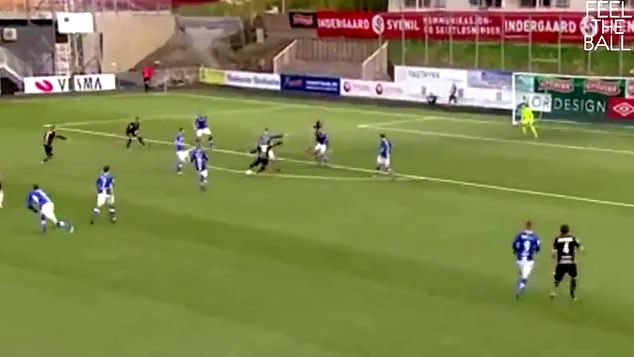 The video proves that Haaland was able to hold his own at senior level regardless of his inexperience, and his former coach was not surprised by his meteoric rise.

‘He had a passion for football but many kids have that,’ Berntsen told BBC Sport.

‘He had what you in the UK call grit. He had something special and when he was on the pitch he was totally focused on football.

‘He learned from an early age how to behave as a footballer, how to behave in the dressing room, how important it is to have fun but to practise a lot. 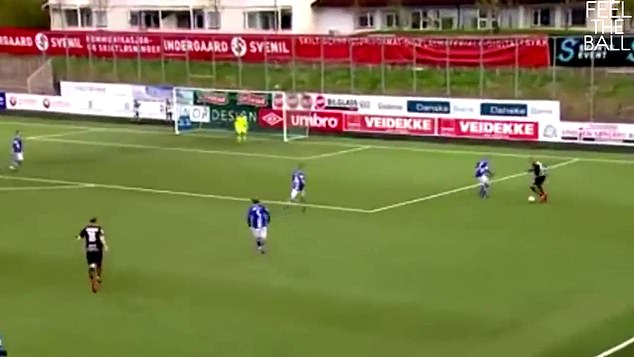 His maiden bow for the club came against KFUM-Kameratene Oslo in front of a crowd of 1,649

‘He had perfect genetics and his family was also very good to let him think in a football way.

‘We began to talk quite early, from when he was 12, that he was something special because tactically, technically and mentally he is never afraid, he has enormous grit and we knew that in a few years, when he was strong and fast, this would explode.

‘But you never know, he could have got bored of football.’ 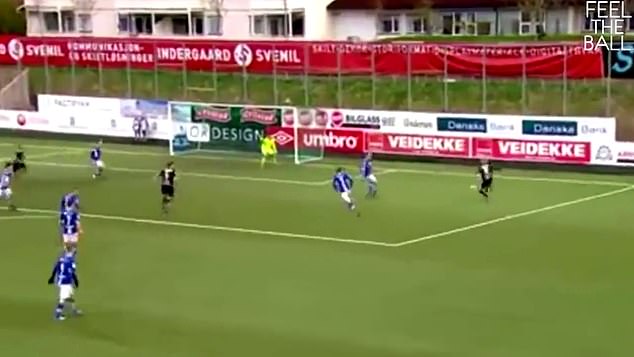 Coach Alf Ingve Berntsen handed Haaland the chance, and said he was destined for greatness

Haaland was handed 10 minutes of first-team action before Berntsen took over as caretaker boss in May 2016, and he went on to play 16 times that season.

However, he was not able to get off the mark before he moved on to Molde.

There, he scored on his debut under Ole Gunnar Solskjaer and has progressed from strength to strength, dazzling at Red Bull Salzburg and Borussia Dortmund.

May 14, 2022 Soccer Comments Off on Footage from Haaland's debut for Bryne proves he was set for stardom
NFL News