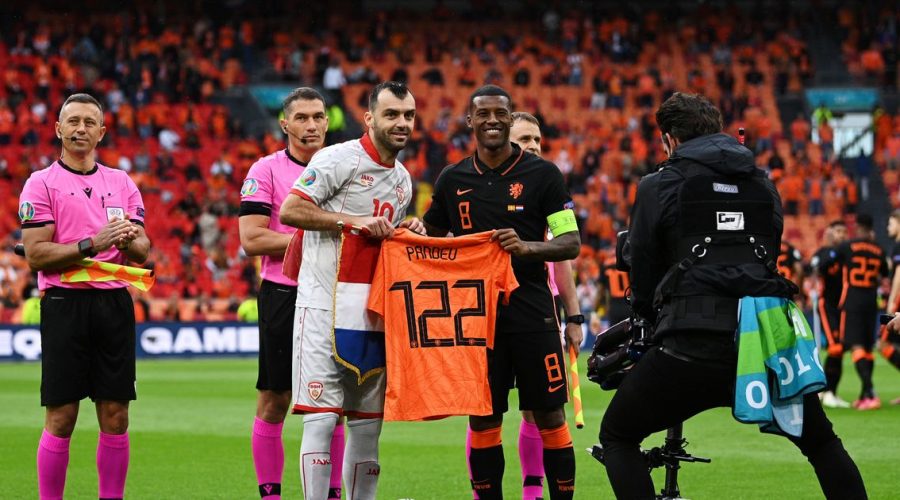 The Netherlands became the second team at Euro 2020 to go through to the knockout stages with a perfect record after defeating North Macedonia 3-0.

Frank De Boer’s side were not thought to be one of the favourites for the tournament, but they have proven the doubters wrong so far.

Their opponents in Amsterdam did provide a stern test in the first-half but Memphis Depay scored after 24 minutes to set them on their way to their third win of the tournament.

Georginio Wijnaldum added two more goals in the second-half, with the Netherlands yet to find out their Last 16 opponents.

Here, Daily Star Sport looks at five things you might have missed from Monday’s match…

More than a decade after winning the Champions League with Inter Milan, Goran Pandev’s time in football is winding down.

Euro 2020 is Pandev’s first appearance at a major tournament, having made more than 120 appearances for his country.

Monday’s match was his final one in international football and before the game Pandev was given a shirt by Dutch captain Georginio Wijnaldum which carried his name and his number of caps.

The Netherlands became the second team to complete the group stages of Euro 2020 unbeaten with their win over North Macedonia.

Goals from Memphis Depay and Georginio Wijnaldum also saw Frank De Boer’s side set a new record for their country.

The 3-0 win means that it is the first time that the Netherlands have scored two or more goals in 10 successive international matches.

Denzel Dumfries has been one of the stars of the tournament so far, scoring in the first game against Ukraine before notching an assist against Austria.

The wing-back has been a key part of the Netherlands’ success so far and he once again impressed against North Macedonia.

Dumfries had more chances to add to his goal tally in Amsterdam and though he failed, he is now the highest points scorer in the tournament’s fantasy football.

Netherlands fans can claim some credit for their country’s defeat of North Macedonia, as plane protests over the team’s training camp finally paid off.

First coach Frank De Boer ignored a plane that carried a banner demanding he play a 4-3-3 formation, with the Dutchman instead sticking with his 3-5-2.

Dutch fans have once again taken to the skies to call for De Boer to hand a starting spot to Donyell Malen.

The message appeared to get through, with Malen lining up at striker and assisting Memphis Depay in scoring his side’s opening goal.

Remarkably considering the score suggested a relatively simple match for the Netherlands, North Macedonia had not one, but two goals ruled out for offside.

They appeared to have struck 10 minutes into the match, but that was chalked off when the assistant referee put his flag up after the ball had hit the back of the net.

Then in the second-half, a lovely finish from Darko Churlinov was also ruled out by a late flag.