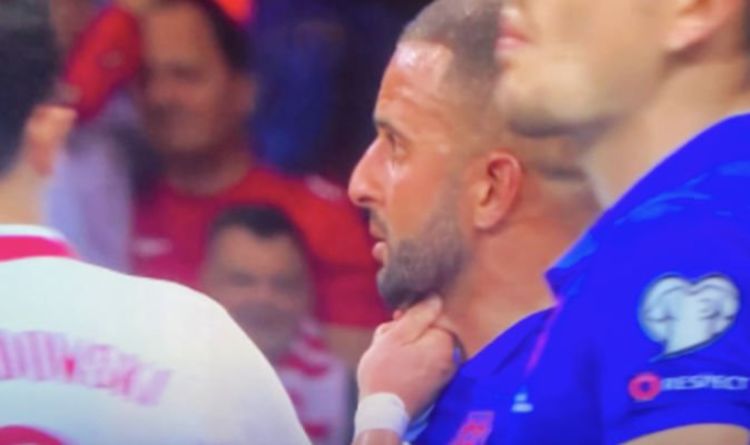 England chiefs have summoned FIFA to review the tussle which resulted in defender Kyle Walker being gripped around the neck by Poland vice-captain Kamil Glik in Wednesday night’s stalemate.

England drew 1-1 on a tense night in Warsaw to give the Poles a World Cup qualification lifeline.

And scenes got ugly on the stroke of half-time as centre-back Glik appeared to pinch Kyle Walker’s neck – prompting the FA to report the incident and order an investigation into the matter.

Glik and Harry Maguire were shown yellow cards for their angered nature in the clash, but according to Sky Sports, FIFA will now look into the matter to understand the full facts of what took place.

“We’re getting to grips with what that was,” Manager gareth Southgate told BBC Radio 5 Live.

“There’s been a report put in and we need to find out a little bit more about what’s happened. At the moment we’re still gathering all the evidence so there’s no point in me speculating any further.”

The on-pitch drama in Poland follows the more sinister scenes in Hungary in England’s previous away match when Raheem Sterling was among those allegedly racially abused.

Sterling and youngster Jude Bellingham were reported to have had monkey noises chanted at them from a large section of the Hungarian home support.

Southgate has come under fire for allowing the Polish side to snatch an equaliser on Wednesday night.

JUST IN: Southgate explains why late Poland equaliser could be good for England

But Southgate stood by his actions, citing that stability is key.

“We were in total control of the game,” Southgate said.

“To bring players into that moment when everyone was performing to a good level and we were in control of possession, you can put players into the game who’ve had to sit in the stand and it’s not so easy to come in in those latter stages.

“There were a couple of moments we looked at it and said: ‘No, we’re doing well, no problem.’

“We were going to refresh the wide players right at the end but that would’ve been to wind the clock down more than anything, but before we could get them in we conceded and it wasn’t a good time to make a change.”

England continue their qualifying campaign in Andorra on October 9, as they look to pull away from the rest of the pack with a win over the minnows.