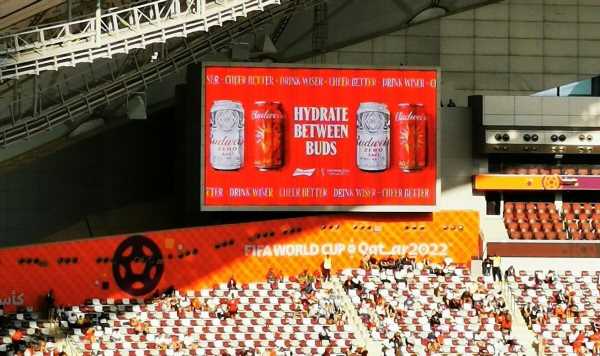 England and Wales to not wear #OneLove armband at World Cup

FIFA have been left red-faced with beer advertised inside the stadium before England’s World Cup opener against Iran. The Qatar authorities demanded sales of alcohol be prohibited after interventions from the royal family, with the country implementing strict Islamic rules. But that hasn’t stopped a huge screen from showing Budweisers inside the ground.

Alcohol was set to be sold in stadiums in Qatar.

But, just two days before the tournament, it emerged that booze would be banned after interventions from the royal family.

However, ahead of England’s World Cup showdown with Iran, advertisements for Budweiser have appeared on the big screen.

That further emboldens claims that Qatar did originally intend for fans to be allowed to drink inside the ground.

Instead, however, they’ll be forced to go down the soft drink route with beverages such as Coca Cola, Sprite and Fanta all available for purchase. – duplication of ‘drink’

Smoking inside the grounds is also forbidden.

However, Express Sport attended a well-fashioned smoking area with barrells that had lighter guns around it – enabling fans to light up once they’ve left the premises.

Fans were in good spirits ahead of kick off, despite the ban on alcohol.

Iran fans were particularly vocal, singing songs and chanting on the Metro and around the ground as they look to inspire their side to victory.

But England supporters did their best to drown them out, despite being outnumbered, with songs of ‘It’s coming home’ heard around the ground.

Speaking ahead of his side’s match with Iran, Three Lions boss Gareth Southgate insisted he wanted to bring ‘real happiness’ to the country.

“Our challenge is to give our supporters a tournament that is memorable,” he said.

“Our country is going through a difficult spell, in the middle of an economic recession and life has been difficult for a lot of people.

“We want them to have a journey with the team that brings real happiness.”

And he added: “Our team have been pretty creative and successful in breaking those sorts of challenges.

“We know we mustn’t be frustrated if it takes us time to score, confident with teams playing against Iran, difficult to score goals.

“This team has been through lots of difficult challenges. You need to respond in the right way and that’s what we’ll aim to do this tournament too.”

Iran coach Carlos Queiroz thinks England are among the favourites to leave Qatar with the golden trophy come December 18.

“What can I say about England? One of the top national teams in the world,” he said.

“They are serious candidates to be in the final position, why not a contender to be the world champion?

“They reached a wonderful position in the last World Cup and Euros. They have a storm of talent.

“I worked with the generation of Rio Ferdinand, Paul Scholes and David Beckham but this national team is really different because they have a realistic approach to any single game which makes them very, very dangerous.”

England reached the semis of the last World Cup in Russia in 2018.

Whether they can win the tournament this time around, however, remains to be seen.