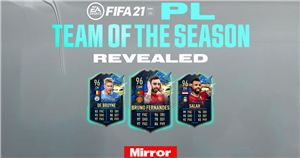 The Premier League TOTS has been revealed, a day earlier than expected, with Bruno Fernandes and Mohamed Salah both included.

The FIFA 21 Ultimate Team Premier League TOTS squad has been revealed early as EA Sports will be supporting Premier League players and clubs in going dark on social this weekend in protest of racial hatred and discrimination.

However, the Premier League TOTS squad will not be available in packs until the usual time of Friday, April 30 at 6pm BST UK Time.

The best and brightest from arguably the top league in the world, some of the highest-rated special items from the Premier League.

Check out the FIFA 21 Premier League TOTS below.

Players who have purchased one of the new next-generation consoles including the PlayStation 5, Xbox Series X and Xbox Series S, and who have already previously purchased FIFA 21 on their older consoles, can now upgrade to FIFA 21 next-gen for free through Dual Entitlement.

Players can also carry over their progress and content in Ultimate Team and Volta Football in FIFA 21.