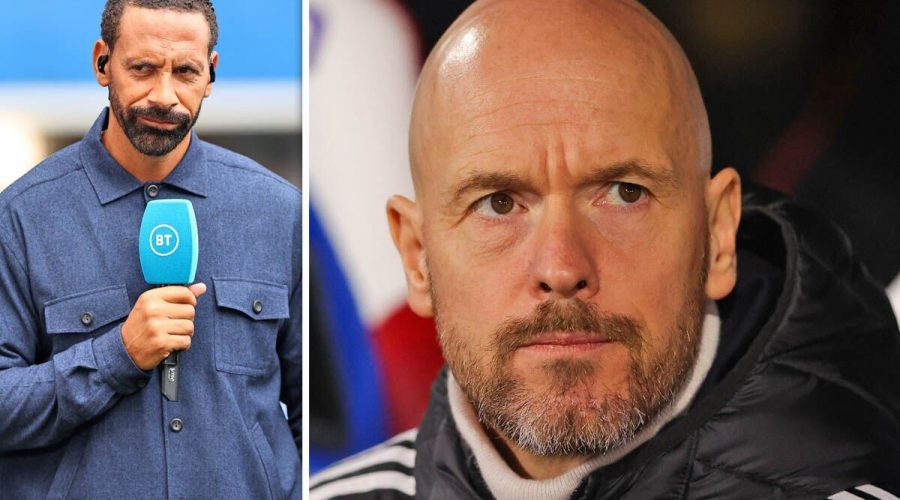 Manchester United legend Rio Ferdinand doesn’t expect Fred or Scott McTominay to start against Arsenal on Sunday. The Red Devils will be without Casemiro for the blockbuster showdown at the Emirates Stadium. The Brazil international is set to miss the contest through suspension after picking up a fifth booking of the campaign against Crystal Palace on Wednesday night.

Manchester United know they must avoid defeat to Arsenal as they look to win the Premier League title for the first time since 2013, when Sir Alex Ferguson ruled the roost.

And the Red Devils’ mission in north London has grown more difficult due to Casemiro’s suspension.

The United star has been a huge hit since moving from Real Madrid back in the summer, becoming one of the first names on Ten Hag’s team sheet.

And with the veteran missing for Arsenal, Ferdinand thinks Lisandro Martinez will play in midfield – with both McTominay and Fred left on the bench.

“There’s no getting away from the fact that Casemiro will be a big miss against Arsenal this weekend,” he told William Hill.

“He’s been brilliant since he’s come in, but United did beat Arsenal without him earlier in the season, so it’s not the end of the world.

“With him out, I’d imagine Erik ten Hag will shuffle the pack with Luke Shaw back at centre back, [Tyrell] Malacia at left back and [Lisandro] Martinez into central midfield.

“You’d think that is the way he’ll go, and in all honesty, I’d be pretty shocked if Ten Hag went with Fred and Scott McTominay in midfield as that doesn’t seem to work.”

United fans are daring to dream of a late challenge for the Premier League title, something that was unfeasible earlier in the season.

Yet Ferdinand insists his old side aren’t ready to compete for the crown just yet, despite their recent progress.

“I never really saw Man United as title contenders,” he stated. “We all get emotional as fans and can get a bit carried away in the moment, but in the cold light of day, Manchester United are in a really good place at the moment.

“If you said three or four months ago that United would be in this position, then there would have been few fans that wouldn’t have said ‘we’re on the right track here’, so let’s remain calm and just praise how far the side has come recently.

“I think top-four and a trophy would be a brilliant season for United and they are very much on track for that.

“They’ll be a few bumps along the road, but the results recently have been fantastic and they’ve just got to keep it up.”

As for Arsenal, Ferdinand has hailed the job Mikel Arteta has done in the capital and feels he’s won players round with his methods.

“Arsenal have been absolutely magnificent so far this season,” he continued.

“They have been everything that Mikel Arteta wanted and probably more.

“The club went through some tricky periods with the manager, but they stuck by him and they are getting the results now.

“He’s building a really really good squad that are hungry and buy into what Arteta wants, so it’s a very good time to be an Arsenal fan.

“They are looking at top-quality players again and that calibre of player is looking at Arsenal with that little bit more respect than they did in recent times.

“There’s big potential there, and while they haven’t won anything yet, there’s a lot of scope for them to be challenging for the big trophies.”

On the title talk, he added: “Arsenal are the favourites for the title and rightly so, but if I was in that dressing room, I wouldn’t be talking about it.

“Of course, it would flash up in your mind now and again, but there’s such a long way to go this season that they just need to take it game-by-game and they’ll be on the right path.

“They look like a bunch of players that wouldn’t get too carried away and be focused on the title and neither does their manager, so if they can keep their feet on the ground and take it one game at a time, they’ll be there or thereabouts come the business end.”