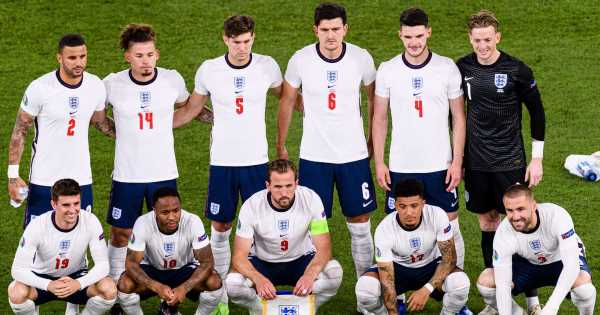 Gareth Southgate’s England team are too young to know fear – and it’s great to see.

Beating Ukraine 4-0 was a real “Wow!” moment because England make a big statement in that game.

All of our rivals will have sat up and looked at that result and thought: “4-0… in a quarter-final? That's impressive…"

Gareth won’t get carried away. He knows Denmark will be a hard game. But everything he is doing is turning to gold.

He didn’t play Jack Grealish or Phil Foden against Ukraine. Our two most talented players – and no-one says a dickie bird!

Jadon Sancho came in out of nowhere instead and did really well, making intelligent runs.

I wouldn’t have a clue what team he picks now – and Denmark probably don’t either, which is a big advantage. It keeps them guessing.

But the biggest thing about this team is that these kids are taking it all in their stride.

It’s like they are playing up the park with their mates. There’s no panic at all. They are 100 per cent relaxed.

They absolutely brushed Ukraine aside. Credit where it’s due – that is a major, major result in such a big game.

The maturity his players are showing is phenomenal. The players have total belief in themselves.

It’s just a different generation. They are used to being connected to the world on social media. They are not afraid to speak out on social issues.

What are your predictions for the Euro 2020 final on Sunday night? Let us know in the comments section.

It’s great to see. It’s a team we can all get behind.

Players like Frank Lampard, Steven Gerrard and Paul Scholes never won anything with England – but they would walk into this team on quality.

There’s just something about this current side that sets them apart. They don’t carry that fear. That weight of history that we did when we played.

I remember watching the Iceland game when Roy Hodgson was in charge and that team was absolutely petrified. It was scared of it’s own shadow.

I don’t see that now. I see a team buzzing on confidence. A team getting used to winning.

Maybe they are just too young. I never used to be afraid of flying but the older I get the more I don’t like it.

This team is going to be around for years to come. England will be contenders at the next World Cup too. No doubt about it. This is not a fluke.

I would be shocked if Denmark make the semi-finals in Qatar. But I wouldn’t be shocked at all if England do it.

I think Gareth helps. A young manager who has had disappointments. That’s a massive advantage. It’s easy for the players to relate to him.

With Fabio Capello and Sven Goran Eriksson, the age gap was too big. The players couldn’t relate to them.

Now, we should get to the final. I’m 53 and I’ve never seen England play in a final!

But it’s not done yet. Some people think we’ve already won it but we need to be careful we don’t get ahead of ourselves.

Okay, none of the Denmark players would get in the England team except maybe Kasper Schmeichel. But they are disciplined, strong, fit, and hard to beat.

This will be the hardest game we’ve played, because of the pressure. But we can do it – because the players are playing with no fear.

The Wembley crowd will be a key factor in the Denmark game.

The fans were absolutely outstanding against Germany. They made it a fantastic atmosphere and they really stuck with the team.

They have to do that again in this game – and I think they will.

I understand what Gareth was saying when he said he was glad England had to go to Rome. It took the pressure off a bit.

Teams come to Wembley and love it. They raise their game. So we’ll have to raise ours.

The pressure is on now and it’s a different test. Against Germany everyone knew that was a toss-up. A tough game.

Now, the fans will expect England to win. We need to stamp our authority on the game early and give them something to get behind.

But Denmark will try and frustrate us and that’s when the fans have to stay with the team.

Luke Shaw has made such a difference to this England team.

He didn’t even start the tournament but he really deserved his two assists against Ukraine.

Shaw is quick, strong, and most importantly he knows exactly when to time his runs. It’s like a sixth sense. An instinct.

When he crossed for Kane’s header against Ukraine his timing was perfect. he knew exactly when to go.

Gareth picked Kieran Trippier at left-back to start the tournament – but there’s no way Trippier would have put that ball in for Kane with his left foot.

Shaw is a very intelligent player and he gives us balance. He’s a defender first and foremost – a better one that Ben Chilwell who is more of a wing-back.

But he can also get forward and his delivery has been really good so far. I think he’s been outstanding.

There’s always someone who forces their way into the squad late on and makes the most of it, and at the moment no-one is doing that better than Shaw.

July 6, 2021 Soccer Comments Off on Fearless young lions are so mature – England see Euro 2020 like a park kickabout
NFL News