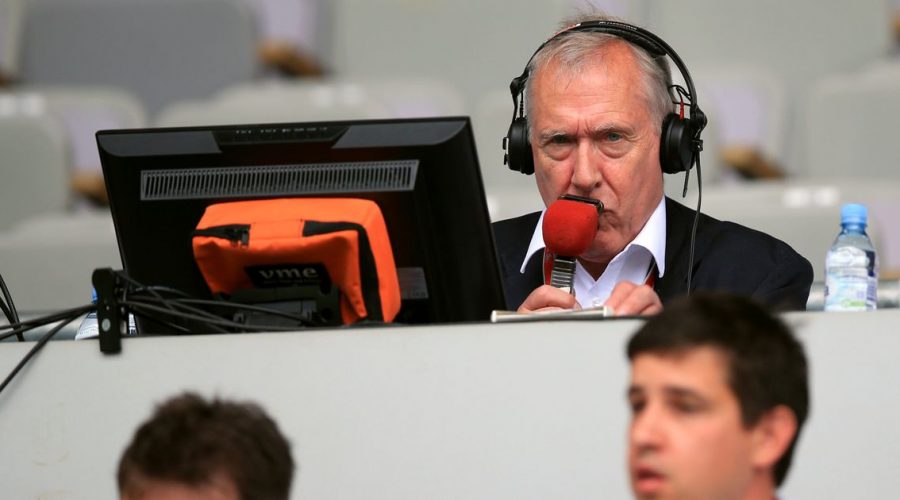 Martin Tyler took a hammering on Twitter after quoting his own commentary and gushing with praise for Phil Foden during Manchester City's Carabao Cup triumph over Tottenham.

Pep Guardiola's side lifted the trophy for a fourth successive season after beating Spurs 1-0 at Wembley thanks to a late Aymeric Laporte header.

City dominated the game but failed to make their chances count until Laporte nodded home a Kevin de Bruyne free-kick in the 82nd minute.

And their performance had Sky Sports commentator Tyler reminiscing about his own commentary from nine years ago when Sergio Aguero's last-gasp strike snatched the Premier League title from under Manchester United's noses in the dying moments of the final game of the season.

The broadcaster had some viewers crying with laughter when he noted that next season would mark 10 years since his 'Aguerooooooo!' moment.

"Martin Tyler just casually quoting himself there," said one Twitter user, while another tweeted: "Crying at Martin Tyler quoting his own commentary just then."

Another wrote: "Highlight for me was Martin Tyler saying it will be the 10th anniversary next season for his famous ‘Aguerooooo’ commentary."

Fans also got stuck into him over his relentless praise for Foden – with the commentator at one point even suggesting the idea of a camera following the City star's movements throughout the game.

"Martin Tyler just plugged Foden-cam," wrote one fan, while another said: "Martin Tyler got Phil Foden posters on his wall."

Another said the commentator's "fascination with Phil Foden is a little bit weird", while another posted: "Yes foden is a good player, really good player but by God… Calm down Martin Tyler."

And it was all too much for one viewer, who tweeted: "Yes we know he’s a talent and could go on to be amazing, but f**k me give it a rest."

April 25, 2021 Soccer Comments Off on Fans rip into Martin Tyler quoting himself and gushing over Phil Foden
NFL News