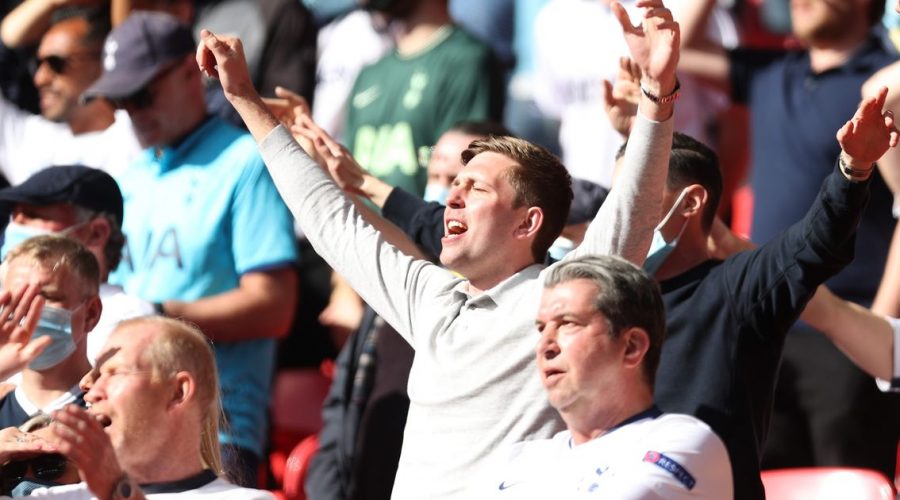 The experience must have felt a little bit novel to begin with.

Supporters inside a football stadium? Watching a live game? It was a glimpse into the future and will catch on. Trust me.

But the problem for those cheering on Tottenham was that the ending was different to the beginning – while being all too familiar at the same time.

Since March 2020 Spurs fans have been forced to watch their favourite side on television.

At least at home there is a remote control, or if things are really bad, a sofa to hide behind.

But this was live, raw, in the flesh stuff from which there was no escaping as Spurs acted out the role of bridesmaids again instead of the bride.

A first hand reminder of the gulf in class that now exists between two teams supposed to be sharing the same closeted and chastised club known as the 'Big Six'.

The 8,000 in attendance at this Carabao Cup final was the most at an outdoor sporting event in the UK since the first coronavirus lockdown.

Both clubs had 2,000 fans, while the remaining allocation had been split between groups including Brent residents and NHS staff.

Strict rules had been put in place, with no one under the age of 18 allowed to attend, while those who were had to have tested negative for Covid-19 within 24 hours of kick off.

Spurs had appeared to smuggle in one extra spectator – and took the bold decision to stick him up front.

But Harry Kane didn't even come close to making the same amount of noise as those did watching him from the stands with increased frustration.

That was just one of the glut of emotions both groups of supporters put themselves through once again on a glorious Spring evening that went a huge way towards making life feel more normal again.

There were chants of "Levy out", in direct reference to the growing disgust at chairman Daniel Levy's role in the doomed European Super League proposal.

One banner read "Fans 1 Gr££dy Pigs 0", the crowd continued the tradition of singing ahead of tune to the national anthem and once again, the referee was a "w****r". On this occasion, the privilege was reserved for Paul Tierney.

One Spurs fan, who might have passed a Covid test but would stood no chance of doing the same with a breathalyser, even had the cheek to describe Pep Guardiola's men as a "two bob team".

For the first time in longer than we all care to remember, there was no masking just how much colour, noise and atmosphere these people bring to the sport.

But in the end someone has to lose – and not even the Spurs fan who derided his opponent could argue that Guardiola's side had deserved to take home the silverware again.

This was City's fourth straight League Cup triumph and Guardiola's 30th trophy as a manager, to cement his place among the all-time greats of the game.

For Spurs, on the other hand, their 13-year wait for a trophy of their own goes on.

Since last winning something in 2008, the London club have now lost four finals and not scored a single goal in any of those games.

This latest chapter of failure will have been painful to watch, but there wouldn't have been a single Spurs fan in the house who'd have missed the chance to see it happen.

April 25, 2021 Soccer Comments Off on Fans return to same-old Spurs – and Kane played like a supporter from the stands
NFL News