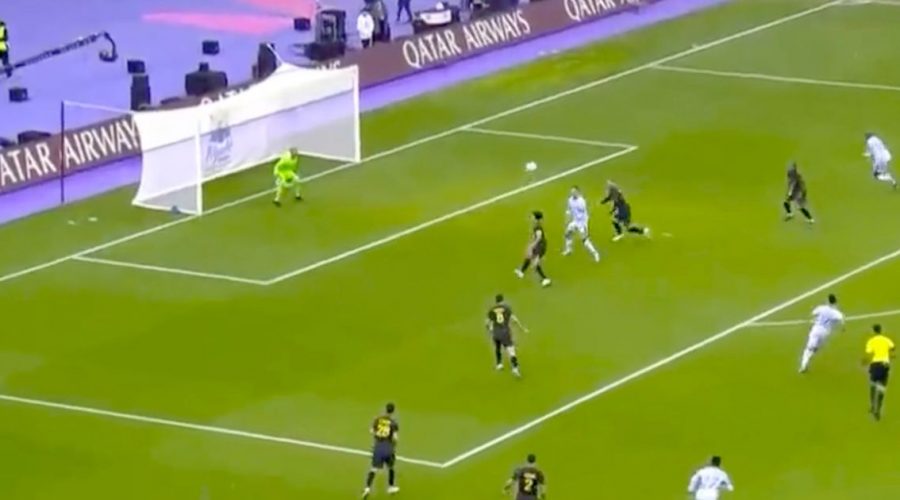 Cristiano Ronaldo scored just as the advertising boards changed to 'GOAT' in the Riyadh XI vs PSG friendly.

Ronaldo made his first appearance in Saudi Arabia since joining Al-Nassr on Thursday (January 19) as they joined forces with Al-Hilal in an exhibition match. They were beat 5-4 by Lionel Messi and Co as two legends of the game faced off for potentially the last time.

In the eyes of many footy fans, Messi drew ahead of his long-time rival in the greatest of all time debate after his World Cup triumph with Argentina. But the Saudi advertising boards seem to side with Ronaldo – as they changed to the word 'GOAT' just before he scored his second of the match.

That was, of course, an advertisement for the sneaker marketplace, who are PSG's sleeve sponsor. But Ronaldo fans still found the coincidental moment amusing.

It was Messi who opened the scoring at the King Fahd International Stadium after just three minutes. Ronaldo then equalised from the spot before hitting his trademark 'Siu' celebration.

Who's your GOAT? Let us know in the comments section.

Marquinhos restored PSG's lead and Neymar could've extended it, but he missed his spot kick. And it was Ronaldo who drew his side level again, first hitting the post with a header before finishing the rebound.

PSG, who'd been reduced to 10 men in the first half with left-back Juan Bernat sent off, again went ahead through Sergio Ramos, but it was short-lived once more as Jang Hyun-soo made it 3-3.

Kylian Mbappe did what Neymar couldn't just minutes later and converted from 12 yards, before Hugo Ekitike gave the Ligue 1 leaders some breathing room.

There was still time for one more goal, though, with Brazilian midfielder Anderson Talisca drawing one back in stoppage time.