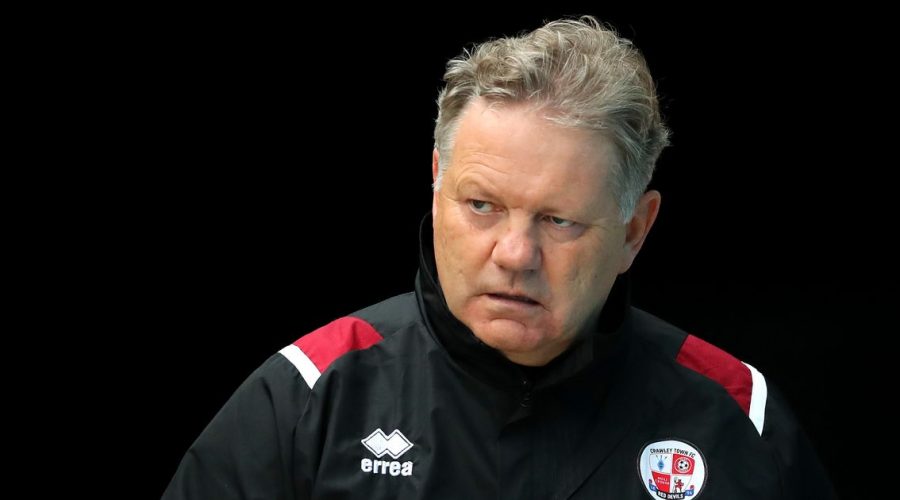 The FA has announced it is weighing up its legal options after "fundamentally disagreeing" with an independent panel's report that landed John Yems with an 18-month ban.

Ex-Crawley Town boss Yems faced 16 FA charges relating to discrimination after being accused of using racist language towards players at his former club. Among the claims aimed at Yems include an incident where he is alleged to have told Muslim players "your people blow up stuff with vests", as well as branding them "terrorists" and labelling one player a "curry muncher".

Yems, 63, left Crawley in May when the allegations emerged and was handed his ban earlier this month, which will stop his involvement in football until at least June 2024. The FA had requested a longer ban and were shocked that an independent regulatory commission found Yems was "not a conscious racist".

An FA spokesperson said: “The FA brought 16 charges of discrimination against John Yems. The independent regulatory commission decided on an 18-month ban for the 12 charges which it upheld or was admitted. We had requested a longer ban.

"Based on the evidence presented to the commission, we fundamentally disagree with the independent panel’s finding that this was not a case of conscious racism. As a result, we are considering our legal options.”

Yems had admitted to one of the 16 charges made against him, while the panel found 11 more charges to be true, with four unproven. The comments were said to have been made between 2019 and 2022 and were deemed in breach of of FA Rule E3.2.

Among the other statements he is alleged to have made include asking African players if they ate jerk chicken despite being told repeatedly it is a Jamaican dish; describing black players in his team as "Zulu warriors"; and using Arnold Schwarzenegger's name in a way which emphasised the N-word.

The independent panel was made up of Wolves club secretary Matt Wild, lawyer Robert Englehart KC and former Watford player Tony Agana. Their report added: “We are confident that Mr Yems as a person is not a racist. Nor did Mr Yems ever intend to make racist remarks. Nevertheless, it is how what he said from time to time would be perceived by those to whom it was addressed which is what matters rather than his subjective intent.

“There was a considerable weight of evidence to the effect that Mr Yems was in the habit of, in his perception, cracking jokes which were perceived as racist by those who were the butt of the jokes. Probably, Mr Yems gave no thought at all to the effect of his language on those at whom the 'jokes' were aimed. Nor did he give any thought at all to the likely reaction of others to the language he used."

Anti-racism campaign Kick It Out released a statement in response to the panel's report slamming the findings, branding the length of Yems' ban a "slap in the face". The statement read: "The discriminatory language outlined in The FA independent panel report is simply shocking.

"Given the seriousness of the incidents detailed, it is very hard to understand how The FA independent panel have concluded that 'Mr Yems is not a conscious racist'. We do not share that viewpoint. The behaviour outlined in the report must be called out for exactly what it is, racism and Islamophobia.

"To speak plainly, a fifteen month ban given the severity of the 11 proven charges is a slap in the face to the victims of the discriminatory abuse detailed in this report and anyone who has been subject to racism or Islamophobia."