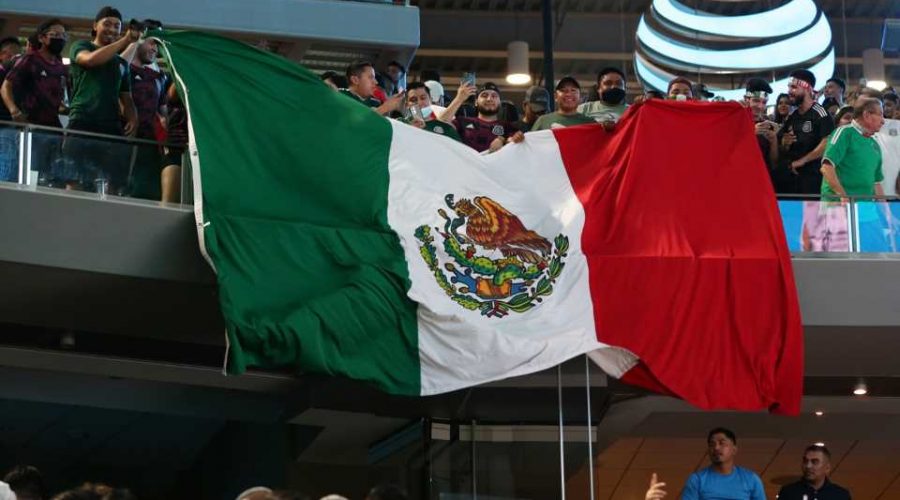 Mexico’s national soccer federation has once again been sanctioned by world governing body FIFA for a homophobic chant used by its fans during Mexican national team games.

In the latest punishment dished out by FIFA, the team will be forced to play two of its 2022 home World Cup qualifiers without fans.

What is the homophobic chant?

In a practice believed to have started among fans in the early 2000s, Mexican national team fans join in unison to shout a Spanish-language homophobic slur (p*** which roughly translates to gay prostitute) when an opposing goalkeeper puts the ball into play on goal kicks. The chant was supposedly meant to intimidate the ‘keeper and the opposing team.

The argument for years was that the word has multiple cultural meanings in Mexico and other Spanish-speaking countries, and that it is not intended as a homophobic slur when used by fans in stadium. But there’s no getting around the fact that it’s a derogatory term that’s demeaning to the gay community. FIFA and anti-discrimination groups have made that much clear and the Mexican soccer federation (FMF) has also recognized it and is taking action.

“It’s not the intention with which you shout or with which you chant. It’s how the other [people] receive it,” Mexican federation president Yon de Luisa told media in 2021. “If anybody feels it’s a discriminatory act, then it is not something that we should include in a conversation. That is no longer a debate. If it is discriminatory, we should avoid it.”

In conjunction with soccer authorities and match organizers, the FMF is working to eradicate the chant from its matches with the knowledge that failure to do so could result in escalating punishment from FIFA.

The world body has made it clear that it will be cracking down on racism and homophobia in the game around the world — European nation Hungary was fined for a homophobic chant directed at Cristiano Ronaldo in 2017 — and the teams of offending fans will pay the consequences for their fans’ discriminatory behavior.

What is Mexico doing about the homophobic chant?

The Mexican soccer federation is now pulling out all the stops in an effort to stamp out the chant, although they didn’t acknowledge it was a discriminatory chant until a few years ago.

The FMF has implemented an anti-discrimination campaign directly targeting the chant and urging fans to refrain from using it. They have worked with match organizers on public address announcements and video board messaging, warning offending fans they will be ejected from the stadium if they’re caught.

In addition, match organizers are required to implement a new three-step protocol introduced by FIFA in 2019 for any discriminatory incidents:

In the brief time since the new measures have been adopted, they’ve begun to have some effect, but in some cities and stadiums, fans still haven’t complied. It is likely to take more time for the chant to be completely eradicated, but the Mexican federation will hope it doesn’t come at the expense of competitive point deductions or even expulsion from official tournaments like the World Cup, a scenario which Mexican officials believe is a real risk should the problem persist.

The chant has been used at Mexican league and Mexican national team games since the early 2000s, but it gained world-wide notoriety during the 2014 World Cup and it returned four years later at the 2018 FIFA World Cup during Mexico’s surprise win over Germany.

The Mexican federation has been disciplined on multiple occasions by FIFA since 2015, so many times that it’s difficult to keep count. The Los Angeles Times reports that the Mexican federation was fined nine times alone in the lead-up to the 2018 World Cup, in addition to 15 other national federations which were sanctioned for similar fan behavior.

But the punishment is now escalating. In June 2021 FIFA sanctioned the Mexican federation for homophobic chants by Mexican fans at Olympic qualifiers played in Guadalajara, Mexico in March 2021: $65,000 dollars and two official home matches played behind closed doors.

The FIFA Disciplinary Committee also opened separate proceedings against Mexico in connection with homophobic chants by fans at a friendly against Iceland played in Arlington, Texas, in May 2021. Punishment related to that incident is still forthcoming.

July 2, 2021 Soccer Comments Off on Explaining the homophobic chant that has Mexico’s soccer federation in hot water with FIFA
NFL News