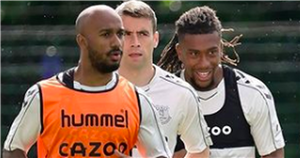 Fabian Delph will play no part in Everton’s pre-season tour of the US.

The midfielder, 31, has come into contact with someone who tested positive for Covid.

As a result, he must now self-isolate and stay in the UK, meaning he misses the trip to Florida.

Delph’s team-mates fly out on Wednesday, with Rafa Benitez getting his squad prepared for the start of the 2021/22 season.

A statement from the Toffees read: “Everton can confirm that Fabian Delph will not travel with the squad to the Florida Cup in Orlando as a precautionary measure after coming into contact with someone who has since tested positive for Covid-19.

“Delph, who began his preparations for the coming season on 5 July and has played in both of the Club’s practice matches – including a 1-0 victory against Blackburn Rovers on Saturday – will resume his pre-season training as soon as his period of self-isolation is over.”

The former Manchester City and Aston Villa star posted pictures of himself in pre-season training earlier on Tuesday evening.

Delph was seen alongside the likes of Ben Godfrey, gearing up for the new campaign under manager Benitez.

The setback for Delph will come as a blow as he will have wanted to impress the Spaniard before their opening Premier League game.

Everton face Southampton at Goodison Park on Saturday, August 14 at 3pm in their first match.

Before then, though, a Florida Cup semi-final clash awaits with Millonarios on Monday at 1.30am UK time.

July 20, 2021 Soccer Comments Off on Everton confirm Fabian Delph will miss pre-season tour as he must self-isolate
NFL News